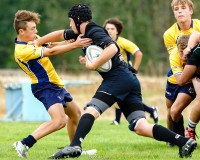 The Washington Loggers U14 State rep-side played the British Columbia Representative XV on Saturday, August 10, at the ChuckanutRugby Grounds, near Bellingham, Wash.

Against Young BC, the Loggers claimed a 41-17 victory — though the scoreline slightly favored the Washington side, with a fierce back-and-forth exchange in the 2nd period. The two sides were evidently committed to open, running rugby. Despite the physical upfront encounters expected in a cross-border match, the teams demonstrated the elevated skills, communication and fitness needed at the representative level.

After a series of training sessions, and a successful (55-12) June 9 match against the Oregon Redhawks, the Loggers side featured players broadly selected from Seattle Vikings, ChuckanutBay, Liberty, Rainier Highlanders, Panthers, West Seattle, Eastside Lions and The Mountain Lions.

While the Loggers win avenges a narrow loss to BC last summer, these fixtures reflect a new orientation in regional development:  “We’ve observed that the rise of ‘elite’ rugby has focused too much on cutting players, too young, when long-term development should at the center of our local and national agenda,” said Miller. “We’re committed to keep interested young players growing, included in a positive, no-cost, high performance training environment — that allows us to select players into emerging match opportunities based on their continuous improvement.”

In March the Loggers Boys U18 won the Vancouver 7s Cup, and lost a narrow 45-31 decision against the BC Representative XV in late July, in Vancouver.  “The healthy relationships we’ve established in British Columbia are giving our boys and girls fantastic exposure to ‘international’ rugby right next door.”

The Loggers and BC resume their match series in spring 2020.