Victory For Tennessee Volunteers As They Play A Rugby Game

Victory For Tennessee Volunteers As They Play A Rugby Game

Co-captain Patrick Beacom helped get the Tennessee forwards back on the job.
11.03.2020 - Alex Goff 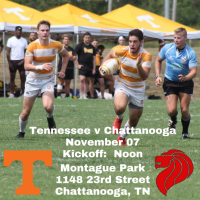 The University of Tennessee men’s rugby team got on the field this past weekend, defeating the Nashville men’s club 39-29 at the Tennessee Rugby Park in Knoxville.

For both teams, it was a welcome opportunity to finally get on the field, and like any rugby organization that has tried to get there this fall, they had to jump through a few hoops to get there.

At Tennessee, the program has a lot of support within the rec sports department. The head of rec sports understands that the rugby team isn’t the same as some other recreational sports—they play intercollegiately, they have several trained coaches at practice, and they aspire to win major championships. So they are given a certain level of trust.

“They trusted us to be able to execute a plan,” said Head Coach Marty Bradley. And they did exactly that, keeping the balls clean, masking up, effecting access control so they could test temperatures, and basically doing everything possible to ensure COVID exposure was kept at bay.

But the Tennessee team had earned the trust. They had worked carefully through the different levels of activity.

“We went three months when the only equipment we used were rugby balls,” said Bradley. “And when we started we didn’t even have that.”

But slowly they worked their way through the months of practice, and just over a week ago they finally hit the scrum machine.

So then game day came. A relatively experienced forward pack, led by co-captains and loose forwards Patrick Beacom and Tory Griffin, slid nicely into its routine and did well to get to the breakdowns quickly and produce good ball for the backs.

The backs were perhaps a bit of a surprise, as they opened up the Nashville defense and helped spark a 39-29 win for the Volunteers. Several times the backs, with three freshman in the line, opted to run out of trouble within their own 22.

“They managed the flip the field on Nashville,” said Bradley. “They showed they can make things happen.”

Tennessee will be back on the field this coming weekend, taking on the Chattanooga men’s club in Chattanooga. It’s simply another chance to play. Bradley said both teams this past weekend made “enough mistakes to last a season,” but it was worth it. They played a second-grade game, too, allowing the Volunteers to put 35 players on the field.