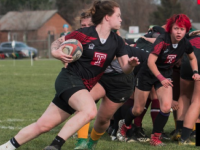 There's little doubt that the ACRA final this weekend is the culmination of the biggest and strongest women's D2 college competition.

With NCR dubbing its women's competition D1, and with ACRA boasting about 40 teams and with the CRAA-overseen Rocky Mountain Conference added in for the playoffs, No other competition approached it.

In the spring there will be a CRAA-overseen women's D2 competition, which will have some strong teams involved, but it won't have as many teams.

This coming Saturday at the Mathews Sportsplex in North Carolina, two former USA Rugby national champions, Vassar (2018 fall), and Temple (2004) will clash for the championship.

For Temple, this is a culmination of a journey back to the championship game—they also made the final in 2010, losing to Washington State University. They got here with a comprehensive 43-12 defeat of Colorado Mesa, and a tight win over a tough University of Vermont team 19-17.

"The team has been reliant on a defense-first approach and valuing possession," said Head Coach Josh Pedrow. "The ladies have also come together as a family and it shows on and off the pitch."

Temple is made up mostly of new players. Only nine of their regular gameday 23 played for Temple before this year.

"Our new players all came in and picked up the game faster then any other year for us," said Pedrow. "The speed at which they learned the game allowed up to get into more complex aspects of the game and raise our level of play."

Scrumhalf Gen Cohen has been superb in helping run the attack but she's also vocal and a leader on the defensive line. Newbies Addie Acker and Patrice Musoke have emerged as key ground-gainers, while multi-positional Honor Burke just takes care of business.

"She’s not only played extremely well but has been a calming presence on the pitch," said Pedrow, who added that No. 8 "Miranda Kenny is like having a coach on the pitch. She has an extremely high rugby IQ and sees the game so well."

They needed all of that leadership and more to get by UVM.

That game, said Pedrow, "was the first time the ladies were tested and had to overcome a deficit late in a game. They fought to the end of the game taking a lead with two minutes left."

Ariel Hayes was superb on defense against Vermont's strong wing attack, while Pippa Barratt and Zay Baribaud combined for two conversions, and that was the difference.

For Vassar, being a champion is a little more of recent memory. Head Coach Tony Brown took his team to the 2017 fall final and then one step better a year later with the 2018 national title.

They, also, start it all off with defense and they beat Colby 53-5 and Coast Guard 36-20 to make this final game.

"It all came down to which team had the ball and was able to exploit those opportunities," wrote Brown in his analysis. With the score 24-15, Sophia Florida scored and  getting in for a score, and 24 became 31 with Marie Claire Cicenia converted to put them in control 31-15.

Both teams scored after that, but Coast Guard couldn't get any closer. Julia Busby went over for the last one and that was named the try of the week for Vassar—just reward for a #9 who has all kinds of energy and sees the field well.

No. 8 Emily Howell scored four tries in that game to add to her six against Colby. It was a team effort, for sure, but Howell is something special when it comes to finishing. In her last three league games, against Marist, RPI, and Fairfield, Howell scored 13 tries, making it 23 tries in five games.

Vassar sets this up by being excellent and working phases, and also smart in using Busby's eyes, and those of others, to see where the gaps open up. If Temple doesn't take care of the week side after ruck-upon-ruck-upon-ruck, the Vassar brewers will punish them.

"To earn a win like this every player has to contribute," Brown said in his analysis. "There were a multitude of small moments that bear recognition ... and it all adds up to a true team performance."

It was also payback. Coast Guard had beaten Vassar in the fall of 2019 for 3rd in the national fall championship.

This is a true championship and will kick off at 2PM ET on Saturday. The game will be live-streamed on The Rugby Network. Despite the similarity of these teams and their relative proximity, they haven't met since 2006, a game Vassar won 51-0.