USA Women 4th in Seville, 4th Overall, But Getting There

USA Women 4th in Seville, 4th Overall, But Getting There 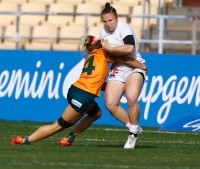 The USA Women’s 7s team ended up 4th in the Seville 7s, ending the weekend with two tough losses.

It was perhaps a day too far for a team that was without one key player; they looked tired in the 3rd-4th clash with England and that, along with one or two really questionable refereeing decisions, spelled defeat in the end.

The semifinals saw the Eagles playing a really on-form Australia side that is packed full of players with strong legs and a good working relationship with each other.

The Eagles held the ball for a long time in the early going of that game, only to see a player isolated, leading to a holding-on penalty, and a disturbingly quick Aussie try.

The USA replied with Kris Thomas seeing a good mismatch with a less mobile player and cutting through. Thomas has been superb in finding her moments.

After that, Australia knocked on the restart, the Eagles took a scrum and quickly got to the Aussie tryline. But Australia defended really well and held on until they were penalized for killing the ball. The Eagles went wide, Kayla Canett executed a perfect catch-pass, and Jaz Gray was in for a 14-7 lead.

Australia knocked on the next restart, too, but the Americans couldn’t make that one pay as they were dragged into touch as the first half expired. That was a critical moment—the Eagles needed that try.

In the second half Australia scored twice in quick succession and took control of the game 21-14.

Near the end, Naya Tapper burst down the sideline and fended off some attention before she curled in for a try near the posts. It was her 100th try for the USA in World Series competition, a remarkable achievement, and it was scored at a clutch moment.

But Nicole Heavirland couldn’t get the kick over, and the Eagles just didn’t connect to finish it off. They could have won this game, but fell just short.

In the 3rd-4th game Thomas once against got things started with a superb run, only to see England torch them on the outside, making the USA defense look very slow. That made it 7-7. Thomas scored right after that, catching the restart and going all the way, something she’s done repeatedly. Now it was 12-7.

But the rest of the game featured some handling and passing errors, and flat boneheaded mistakes—getting tackled and getting back up without releasing the ball, for example.

But, there were four key moments that could have changed the tide:

1. Cheta Emba went on a long run fending off defenders as she went. She was caught, and the USA support was woefully slow. Nicole Heavirland was close, but no one else really was. No try.

2. One USA player was over the top of the ball in the ruck but the English player was lying on top of the ball. The referee, Jaco De Wit, amazingly, didn’t call a penalty against England, saying the USA player needed her hands on the ball, not the tackled player’s body, to get a holding-on penalty. This is patently silly—whenever a tackled player is shielding the ball from the jackaler and the jackaler is there first, it’s a penalty. England benefited hugely from this bad call.

3. Thomas was penalized for not releasing the tackled player when on replay it was clear she had, and the tackled English player had lost control of the ball.

4. Emba went on another massive run, fending off defenders, and no one was there for her. Emba was forced to cut inside and in trying to change her hand position to make a pass dropped the ball. The ball went backward but was called a knock-on, but De Wit’s mistake aside, the USA players were, again, far, far too slow to catch up to help their teammate.

Overall, the last two weeks in Spain have been hugely successful for the Eagle women. They won a tournament and made the semis of another. They remain 4th in the World Series standings in a tight cluster with France and Russia, teams they gained on. And, remember, it’s the best four events, so if the USA makes the semis in the last two tournaments, they can ditch the scores from Dubai.

But at the end they were tired, and the smart decisions and spry play from Málaga wasn’t to be seen on Day 3 in Seville. Somebody should have been on Emba’s hip. The passing against Australia suffered, we think, from fatigue.

Without Maher this team made the semifinals. With Maher they win the tournament.

We’re looking to find out why we didn’t see more of Spiff Sedrick. Every time she was on the field she provided a spark, yet she wasn’t used on Day Three.

Kristi Kirshe is an outstanding open field runner, and yet seemed to spend the tournament running into traffic. Whether this was by design, or just how things happened, we’d like to see her find some more space to work with.

The next tournament is in Langford, BC, and the Eagles are drawn with England, Brazil, and Fiji, who we hope will be able to return. The USA has had a ton of trouble with Fiji, but they’ve got three months to figure that out.