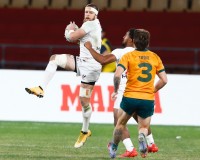 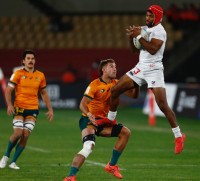 The USA Men's 7s team will play England for 5th in Seville after beating a tenacious French side in the 5th-place semifinals.

The Eagles ended up playing for 5th because they couldn't quite get all the pieces put together on Day 2. Against South Africa, who still haven't lost this season, the USA started well but knew they had to control possession to win. A long period of USA attack was halted by some excellent South African tackling, with David Still's attempt to power in at the corner being shoved into touch. But pinned in their own end the Blitzbokke opted to kick, the Eagles regathered and a nice run-and-stop from Naima Fuala'au halted the defense enough that a flat ball to Kevon Williams up the middle was good for a try.

The Eagles won the ensuing restart but a silly penalty in the ruck gave the ball up. South Africa scored moments later through Dewald Human and it was deadlocked 7-7.

But the Americans battled on and with time up on the clock for the first half a snappy switch between Williams and Joe Schroeder put the skipped through from 80 meters. The USA led the World Series leaders 14-7.

South Africa regained the momentum after that. A couple of penalties and they were in. The Eagles were starting to get imprecise in the ruck, and then they were slow to support. Carlin Isles was isolated, called for holding on, and suddenly it was 24-12.

A well-taken break from Maceo Brown (Tempe, Grand Canyon University) to set up Perry Baker made it 24-19, but the USA didn't have anywhere near enough time to finish the comeback. South Africa, therefore, won the pool and the USA had to face Australia in the quarterfinals.

The Eagles' problems around the ruck continued. Australia scored first, but then a key tackle by Schroeder allowed Isles to go 90 meters to equalize. Right off the restart the ball fell to Baker, and off her want. Within seconds it was 14-5 USA. But the Americans would not score any further after that.

Penalties, seeing the ball squirt out of the ruck, and, maddeningly, penalties for placing the ball and then shoving it in a different direction while on the ground—obvious penalties—gifted Australia possession and a 29-14 victory.

A new day and a new approach. The Eagles were much more secure with the ball and were patient against a tough French defense in the 5th-place semifinal. Isles blazed past the tacklers for the opener, but then it was a case of working the ball and not doing something silly. Eventually, with a Frenchman in the sin bin for a deliberate knock-on (a harsh decision by the ref to be sure), they had to find a gap. Smooth passing got it to Marcus Tupuola on the wing and the Belmont Shore /  Notre Dame College product just cruised into the corner.

France responded early in the second half, but then perhaps the kep moment came right after. A scrum in the middle of the field and in the French half gave Kevon Williams a chance to see that France was marking the USA speedsters out wide. Playing scrumhalf, then, Williams simply picked up the ball and took off up the middle. No one was close to him and he was in under the posts. Steve Tomasin converted and it was 19-7. The Eagles wanted to run the clock out after that but a knock-on in a ruck set up a chance for the French and some direct running down the sideline and some well-timed offloads put Joachim Trouabal in. 19-12 with time left.

But the Eagles took the restart brilliantly and ran through a couple of rucks before Williams cantered back into his own in-goal, waited for the hooter, and booted the ball dead. Not a dominant victory, but a pretty gritty one, and the USA plays England for 5th in Seville.

The USA is guaranteed now to hold onto 4th in the World Series because the only teams behind them in the standings who could gain on them in points, Ireland and, possibly, England, are too far behind to catch them.