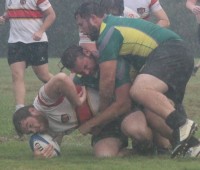 The win put Rolla at 3-0, dropping Pitt State to 2-1. Meanwhile Central Missouri got its first conference win with a 112-0 shutout of UMKC.

S&T had some players graduated this fall, but they also returned some key talents. Jack Lester has taken over flyhalf after Brandon Bollinger's graduation. Center duo Nick Tompkins and Brayden Wuebbeling continue to shine each game and complement each other very well with their speed and physicality. Winger Nick Eads has continued to punish opponents around the outside.

Up front, veterans Caleb Eaton, Austin McMillen, Mitchell Jarosinski, and Dylan Moorman have set the platform, and younger players Kyle Halter and Logan Gallagher have helped fill in for the loss of the likes of lock James Willis, flanker Nicholas Sbravatti, and hooker Cameron Smith.

The key, though, against Pitt State was to keep the pace of the game up despite the rain. That, combined with strong ball control helped create the space. S&T and Pitt State will likely make the Gateway playoffs, and it looks like St. Louis University (14-7 winners over Washington University), and idle Southern Illinois are tops in the Eastern Division.