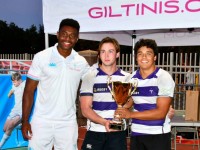 This was the third time these teams had played. In March in a preseason clash Thunder had won 12-7, while in their league game May 14 the Raptors had emerged victorious 24-21. This time, it was even closer.

Thunder had more of the attacking run of play in the first half and entered the break up 7-0. That try, however, actually came from domestic pressure. As SOC was trying to run out of its half hooker Andrew Hernandez picked off a pass and was through. Solomon Williams converted for the 7-0 lead.

In the second half, the Raptors began to build their attack and had the better of territory and possession for much of the time. Two tries put them up 12-7 with about five minutes to go. Then the Raptors looked to put the game away, spun it wide, and wouldn’t you know it, Hernandez was there again to steal the pass and gallop in for the try. Williams kicked the conversions to take a 14-12 lead.

The Raptors had a chance to take the lead back, getting a penalty in the middle of the field and about 35 meters out. The kick to win it drifted left, however, and that was the game.

Thunder did the job thanks in large part to their hooker, to Williams, and also to Damian Ramirez, who halted some crucial, SOC attacks by stealing lineout ball.

“I’m happy that all the work paid off,” said Thunder Coach Jacob Campbell. “To get a win like this against such a good team—a team where our guys know so many of their guys because they play together for the SoCal Crusaders — was great. I am really proud that the kids get to enjoy a SoCal Championship, and we go on to Nationals, where we want to play the best teams in the country.”