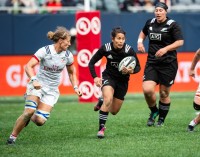 Pending visa approval, the trio will depart for England within the next few weeks to join the team for the 2020-21 Premier 15s season.

The signings mark an important milestone for the Women’s XVs program as a whole, as growing talent within the U.S. has led to an increased demand for American women within the global professional game. The trio join the ranks of just four other players who have competed for overseas professional teams in the last Rugby World Cup cycle. Those players include Kristine Sommer, Jess Wooden, recently-retired Kimber Rozier, who played for Harlequins Ladies, and Hannah Stolba, who played for Rugby El Salvador.

Led by former England players Susie Appleby and Amy Garnett, the Exeter Chiefs’ officially founded their women’s program in September of 2019 and are confirmed to compete through the 2021-22 Premier 15s season. This is a highly competitive league so teams are looking for experience international talent; Cantorna, Duncan, and Zackary all fit that bill.

Penn State grad Cantorna is a skilled flyhalf/fullback with a good kicking boot both from the hand and the tee, and an eye for space. Zackary (Benedictine College), who has excelled for the Eagles in 7s and 15s, and captained the 15s team these last two years, is a tireless loose forward who can suit up at any of the back row positions and hits hard both on defense and with ball in hand. Duncan, who was a standout soccer and softball player at East Tennessee State before taking up rugby after college, is a hard-running wing with tenacity, elusiveness, and power.

“I’m very excited to train and contribute to such a fantastic rugby program," said Cantorna. "As I move forward with this new endeavor, I’m incredibly grateful for the opportunity and ongoing support I get from the rugby community.”

“I am thrilled for the opportunity to grow as a player in a professional environment abroad," added Duncan. "To do this with a club like Exeter, that's so focused on culture and investing in women's rugby, makes it even more special.”

“The Premier 15s is an extremely competitive league, filled with world-class athletes from top-tier nations like England and Ireland," Chimed in Zackary. "This is an exciting new adventure -- joining Exeter as they embark on their first season in the league -- and I look forward to developing further as a player under the watchful eyes of Susie and Amy.”