Thomas More Pulls Off the Big Shocker, But Was it Predictable?

Thomas More Pulls Off the Big Shocker, But Was it Predictable? 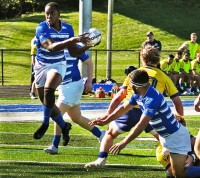 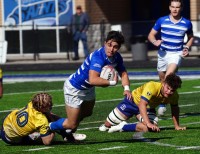 Thomas More's 45-14 defeat of Marian in the MCRC final was a result very few saw coming.

And yet further examination indicates that maybe it was in the cards. Marian, as a new varsity program that has been active in recruiting talented young players has been testing itself with tough opponents throughout the fall (and, indeed, the spring before). So they had lost games, but against University of Kentucky, Iowa Central (that was 29-21), and Lindenwood. Meanwhile, their conference wins were to the tune of 81-0 and 102-0 ... or forfeits.

And there is perhaps the key word—forfeits. Marian had five fixtures that weren't played. Of course, Thomas More had a similar problem, but did get six games in before their clash with Marian. Those included a loss to Kentucky that was basically the same score as Marian suffered, and wins against Cincinnati and VMI. They also had conference wins over Eastern Kentucky, Western Kentucky, and Miami of Ohio.

(A quick note about Miami. They got pasted, 102-0 against Marian and 111-0 against Thomas More, but at least they showed up; that counts for a lot.)

After Miami, Thomas More had three straight cancelations before facing Marian. But, ultimately, their results weren't significantly different from Marian's, and the Saints had played a little more often and more regularly than the Knights.

That, along with a lights out kicking performance from Matias Caramuti, and a discipline implosion by Marian (four yellow cards and two reds) produced a Saints victory.

Thomas More lost high-scoring Alejandro Torres to an ankle injury early, but the More players kind of rallied after that.

Caramuti played an outstanding game and was leader of the backs, scoring a try, and going perfect on the day with his kicks for goal, 5-for-5 on conversions and one penalty goal.

More said the final score was not indicative of the competitiveness of the two teams.

"John Harley runs a phenomenal program and they will bounce back from this," said More.

Can they repeat it? Is Marian done? Well, no. In fact, Marian is now into the playoffs and finally they get to play a game that's meaningful. Of course they did on Saturday, too, and perhaps let too much emotion carry them. Now with a play-in game against Central Michigan, Marian's players know the road to the DII championship is not a cakewalk. Thomas More? They play the winner of St. Louis University and Marquette. At the moment indications are that Marquette should come through there. They are very strong, and, despite being #3 in the Great Midwest, have the ability to go far.

So it was a surprise, yes, but these two teams will want to produce some more.