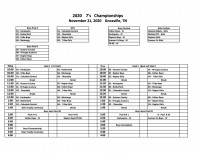 The Tennessee State HS 7s Cup kicks off this weekend with 21 Boys and Girls HS teams competing at Tennessee Rugby Park in Knoxville.

It’s been a bit of a chore to get all Tennessee teams in action, as the state has had its bad COVID areas (the West), and some areas where it has not been so bad.

So this weekend’s championships will be mostly Middle Tennessee and Eastern teams. An eight-team boys championship bracket includes a very effective Harpeth squad heading up Pool A, and the Raptors among the contenders in Pool B.

The girls bracket is four teams, but very competitive as Columbia Central brings its combination of power and pace. The Raptors, Tribe, and Riverdale can all cause problems, and while Columbia might be favored, it’s close.

Nine more teams will compete in a festival. The five boys teams are JV teams of five championship contenders. Meanwhile, the girls festival will include some 1st teams such as Sumner County. The Atlanta Rebels come in to make this a cross-border event, while a motley team and the Raptors JVs round out that group.

The Tennessee Rugby Park’s three fields will host the event, which will run from 10am to about 4pm Saturday, and it’ll be a busy day with as many as 37 matches on the slate. See below for the full schedule.