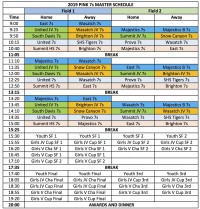 Utah Youth Rugby is set to hold a huge Pink Sevens tournament, and for the 5th year in a row this event brings girls together to build the game.

The Pink Sevens was formed in 2015. Summit Rugby out of Colorado had some issues with its fall tour and needed to find games. The Utah Youth Rugby executive team stepped in to form a 7s tournament and invited some of the top girls teams in the region to participate.

The event was a huge success, and out of that, more and more teams took notice.

(Click on the images to see the pools and the schedule)

"The tournament is a testament to how hard Utah’s State Rugby Organizations worked to seize this chance and give girls an equitable opportunity to play,” said Audrey Billingsley, USA Rugby Youth and High School congress member. “The girls get to enjoy the camaraderie which is the social-emotional aspect of the game within the teams along with the fierce competition which is the physical aspects of the game. I am grateful to Utah Youth Rugby who has taken in girls from my own team to give them an unforgettable experience at the 7s series. The tournament is well run and more than worth the long drive to get there.”

"We're very grateful for all of the referees and what they're doing to support us," saif Owen Power, President of Utah Youth Rugby.

This is a girls tournament, but it has served to grow the game among boys, too, as many boys players attend to support the girls teams. This tournament is open to teams from all over the nation, and, held at the Regional Athletic Complex in Salt Lake City, is played at a professional venue, with the final games under the lights in the evening.

“The Pink Sevens is a special showcase of the incredible talent that Utah and the USA has in high school girls’ athletes,” added Power.

The Pink Sevens would not be complete without a social afterward. Participating teams will have an opportunity to renew old friendships and get to form new ones. The bonds of friendship and respect that rugby forms is a significant part of the rugby culture, and something the tournament celebrates.

“Winning a tournament is fleeting, but rugby friends are for life,” said Power.

The players will celebrate with a dinner of Hawaiian chicken and rice, and get an opportunity to mix and socialize.

As for the teams, United won the Utah Youth Rugby fall series and is one of the favored teams, while Colorado's Summit HS is back and always a big favorite. Summit brings a Varsity and a JV team to Salt Lake City, and should have solid competition in the rapidly improving Majestics in their Varsity pool.

United and Summit face off in a very difficult JV Pool A.