Some Straight Talk About COVID Stats

Some Straight Talk About COVID Stats

Rugby in some of the more active areas of the United States has been pulling back in the wake of an increase in COVID-19 cases around the country, and we’d like to try to put this in context, and maybe shed some light on where we’re going.

This article isn't designed to tell you whether we think you should be playing rugby or not. It is designed to give you some information.

We Knew This Was Coming

That doesn’t mean the rise in cases is insignificant—it is quite significant—but anyone saying it’s a surprise has forgotten what was said only a few weeks and months ago.

An Increase In Cases Isn’t The Whole Story

When we hear about various activities, from playing sports to going to restaurants, being curtailed, we ask “is that activity the problem?” Sometimes it is, sometimes it isn’t.

What has to be looked at past number of cases is the seriousness of those cases, who gets and spreads it, and what age they are.

So here’s some information, mostly from the US Centers for Disease Control (CDC) that you often don’t get in the mainstream news because reporters either don’t have the time, or can’t be bothered, to tell you.

COVID-19 is mostly very serious for older people. This has been true since the beginning of the pandemic over a year ago, and is true now. From the CDC a few days ago:

"Since the week ending September 26 … overall weekly hospitalization rates have increased. Overall increases have been driven primarily by an increase in rates among adults aged 50 years and older."

Before September, the CDC shows that the median age of COVID positives was about 47 in early May, and steadily dropped to a low of 35 in mid-June.

Then the age rose slowly until late August, which is when college students started arriving on campuses, 20-somethings got sick of staying home and started going out, and when protests ramped up. By August 23 the median age for positive tests was back at 35.

Interestingly, the data changes in different regions of the country.

But there’s a general trend here that the CDC points to. Younger adults went out, more contracted COVID, and then as they continued on their way (sometimes asymptomatic) they infected older people, so the average age bumped up again.

From the CDC: "During June–August 2020, COVID-19 incidence was highest in persons aged 20–29 years, who accounted for >20% of all confirmed cases. Younger adults likely contribute to community transmission of COVID-19. Across the southern United States in June 2020, increases in percentage of positive SARS-CoV-2 test results among adults aged 20–39 years preceded increases among those aged ≥60 years by 4–15 days."

Currently all age groups are testing positive in about the same percentages (the youngest and older age groups have the lowest positive test percentage of those tested, at about 8%, with those aged 5-17 at the highest at around 11%). However, you’ve got to be careful here. Children are more likely to be tested because they feel sick, while older people are more likely to get tested just in case.

In addition, a positive test percentage should not be extrapolated to the entire population. Just because 10% of a group tested positive doesn’t mean that 10% of everyone in that demographic will be positive. Those who get tested are, to a certain extent, self-filtering. There are people who feel sick, or who are in high-risk occupations or situations.

Death statistics by COVID-19 are disputed by some because there have been examples of people who die from another serious illness, or even an accident, and are found to also be COVID-positive, and get put into the COVID lists. But we’re not worrying about that too much. Instead, we’re looking at trends, and we have strong reason to believe that the trends hold even if you filter out the “died with COVID” from the “died from COVID.”

The CDC’s list of deaths is actually “Deaths Involving COVID.” That’s the number you read and hear about. It included Pneumonia, for example, because Pneumonia is a frequent partner of COVID when things go really bad.

According to the CDC, of all the “Deaths Involving COVID” see the graphic top left (click on the image to enlarge) which takes all COVID deaths as 100%, and the divides them by age.

You'll see, for example, that only 2% have of COVID deaths affected those aged 34-44.

We also listed CDC’s list of deaths from all causes for the same period (COVID accounts for about 9% of the total). You’ll see regular life is more treacherous for young people, while COVID is nastier that day-to-day life for older people. Of the total COVID fatalities in the USA, 79% were suffered by those over 65.

But dying from COVID isn’t the whole story. You can survive COVID and have it be a horrible experience, and, potentially, leave you with long-term health problems. While some people don’t even notice they have it, others have to go to the hospital even if it’s just a visit to the ER, and some end up in intensive care.

According to the CDC, hospitalization rates have remained relatively steady since mid-March. After a steep rise to about 2.9 people per 1,000,000, it has run between 1.2 and 2.2 since then. There was a slight rise during October, but currently the trend of hospitalizations, despite the rise in positive cases, is downward.

This stat flies in the face of statements by politicians and experts who say that hospitals will be overwhelmed.

If you factor in age, you see that hospitalization rates for older people are much higher than for younger people. However, the rates for children zero to four years old is actually rising, albeit moderately.

(It's worth noting that the CDC predicts the overall hospitalization rate to rise.)

Emergency Room and Outpatient visits rose sharply in March (while visits for flu-like symptoms dropped by a similar amount), and then COVID ER visits dropped in the summer only to jump up again in August and now in November. The current trend for ER visits is upward. In September about 2.0% of ER and Outpatient visits were COVID-related, and now it is at about 3.9%. The peak in March was just under 7.0%.

Another CDC graphic also shows that the vast majority of hospitalizations from COVID are for adults.

What this says is that, like with deaths, COVID is more serious for adults, and especially older adults, than it is for young people, especially those younger than 18. This is borne out also from stats that show no major changes in COVID stats for kids even when school started. 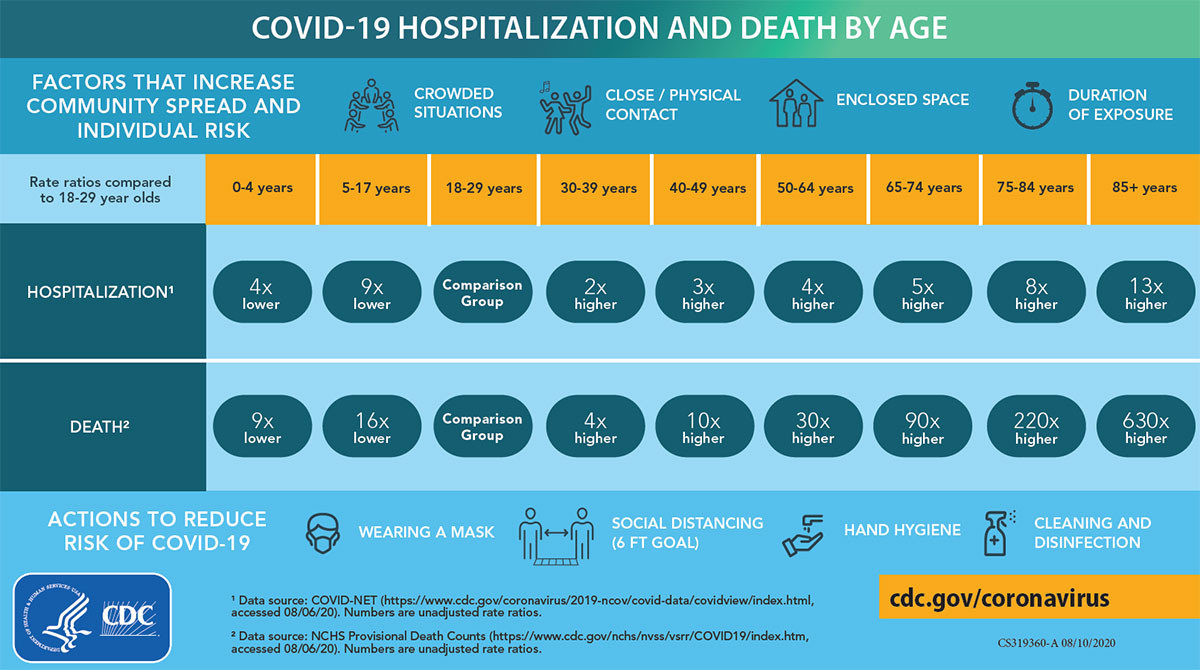 No explanation has been offered by the CDC for this difference.However there are factors that could explain some of the dichotomy: prevalence of certain underlying additional health problems in certain ethnic groups; socio-economic factors that increase the prevalence of certain health issues OR make visiting a hospital a more likely option when seeking health care; lack of widespread testing in some areas, meaning that people in some groups are only getting tested if they feel sick, rather than as a precaution.

But what is fact is that Hispanics are heavily represented in occupations that require showing up (i.e. you can’t do them remote). Landscaping, cleaning, construction, drycleaning, farming, and manufacturing are all heavily Hispanic occupations (source Bureau of Labor Statistics).

These are all jobs where you have to show up and where you often are in contact with a lot of people.

But, this is mostly speculation. The statistics indicate that, for whatever reason, Hispanics, American Indians, and African Americans are in a higher-risk group, as are people over 65 and people with underlying health conditions. But that doesn't mean if your rugby team is heavily People of Color that it is more likely to have a COVID problem. There's not enough information to determine that.

If reporting of COVID-19 were more complete you'd hear more about rises or falls in cases in the context of numbers from earlier in the year, and in the context of hospitalizations, ICU admissions, and fatalities, with a nod to who is more seriously hit and why.