Six in a Row for Regis Jesuit

Six in a Row for Regis Jesuit 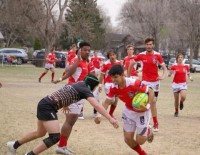 Regis Jesuit made it six wins in a row with a 44-19 CIRA league victory over Palmer over the weekend.

"We've been pretty impressive this year with this group of players," said head Coach Anthony Mattacchione. "We have 21 seniors in our program of which nine are starters on the Varsity side. We've been fortunate enough to have the football captains have either been captains or leaders in our program the last few years."

Logan Hilliard has been a leader by example for the Regis football and rugby team.

"Our success in recent years of come from multi-sport athletes, not just football but track, wrestling, and hockey," said Mattacchione. "It's nice to see you how our numbers steadily growing and increasing the commitment and the higher rugby IQ as our players are developing."

Regis is undefeated in the Colorado Interscholastic Rugby Association (CIRA).