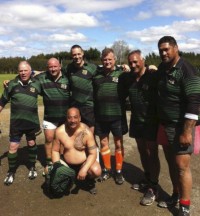 The next thing in short-form video rugby content is coming together as a new venture, Rugbyfactory.tv, and is hitting the internet via all major social media platforms.

Started by three longtime acquaintances; Henk Van Niekerk, Patrick Guthrie, and non-operating partner Jan Steenkamp, Rugbyfactory.tv is taking rugby content to its next logical step. Breaking games and competitions down into short video clips that fans, players, referees and coaches can use to follow the game, the teams, and the players how they want, when and where they want.

All three of these gentlemen worked together before, kicking off their relationship 15 years ago. Around 2005 the opportunity to collaborate came about when a 5-year SANZAR rugby rights package was secured. This was an ideal opportunity to test and learn how live and vod (Video on Demand) sports would be consumed and monetized in the coming years. Using this licensed content, they developed the first North American, subscription-based, OTT live streaming video platform called MediaZone Rugby Channel.

As the years went by the three would keep in touch and always reconnected around Rugby World Cup years. In fact, in 2011 both Pat and Henk would end up playing in an old boys rugby game in Wellington, New Zealand (see photo). The game was set up by Ken Laban, NZ rugby commentator and personality. The Golden Oldies (WAGS) from Wainuiomata were playing against the Greytown Old Boys Club, on the same weekend of the Australia vs Springboks quarterfinal game in Wellington. Van Niekerk got talked into playing for Ken’s WAGS despite not having any kit. But the Wainuiomata club hooked him up and Henk proudly states “I played in Piri Wepu’s boots!”

Not everyone gets to stand in the shoes of an All Black scrumhalf, but you remember it when it happens.

Fast forward to RWC 2019 and as the Springboks lifted the Webb Ellis trophy, the idea was floated to revisit those early business concepts. What would rugby viewing and rugby content look like for North America audiences in the next 10 years? In the last 10 years there have been dramatic changes in digital video technology, editing, production and several new social media platforms, which changed the landscape of sports production, distribution and consumption. In early 2020 the three discussed the idea of using a combination of software, video editing skill, and rugby knowledge to cut and publish short-form near live clips of rugby games. Guthrie was working closely with the City of Glendale, Colo. producing content for RugbyTown USA. Rugbyfactory.tv was afforded the opportunity to test their initial concepts and ideas on a Major League Rugby game on March 6.

This live game produced 19 clips that were distributed and published to social media platforms, within minutes of the individual live action sequences being broadcast to cable and satellite channels, without negatively impacting the live production. These clips might be funny moments, or exciting plays, or they might just be nice examples of good rugby.

The three discussed how their plan could be expanded to more rugby coverage, and the business of Rugbyfactory.tv was born. The business would start its focus on North American rugby content across National, Collegiate and Professional men's and women's 15s and 7s. With the COVID-19 shutdowns halting any chance of getting live footage, the business pivoted from live production to archival and vod clipping, but the basis of the content, audience and distribution strategy stays the same.

A New Way To Watch

“I’ve got three teenagers at home,” said Van Niekerk. “We’ve both got kids; this is how they consume media. It all starts on social media platforms; it’s short form and its punchy content. I can't remember when my kids last sat through a full live TV broadcast of any sport.”

Fans will visit the stadium in person and watch an 80-minute rugby game. But the opportunity to grow the sport and expose it to new and larger audiences that need to be turned into fans, requires an understanding that these folks aren’t necessarily going to watch a full 80-minute game, either on TV or anywhere else. Certainly new audiences could more easily be drawn into short clips that highlight rugby’s physicality, the excitement and free-flowing nature of the game and, most importantly over the longer run, the personalities of the game—like Dallen Stanford having a bit of fun in the clip below.

“During a live game I can cut out 20 to 30 clips to share live,” said Guthrie. “With archived games, depending on quality of originating production, we can cut out 100-150 clips showing all aspects of play. We can cut out all the scrums, lineouts, mauls, and technical aspects of the laws of the game, or something that’s just silly and fun.”

“From a coaching standpoint,” added Van Niekerk. “Instead of having a presenter stand there and tell you what is the right way to do something, we can show it; good (and bad) technique, example after example, in real game situations, and let the rugby speak for itself.”

“We are expanding to 7s as well, with a few games produced and published already. But what we are most excited about is the massive potential in more women’s content. We have published 100’s of women's clips across Collegiate and Club leagues and have received great feedback and support from the women's rugby community” said Guthrie.

“If you have an entire playlist of videos showing good technique performed by women in game situations, is that not more valuable to the aspiring female player?”, said Guthrie.

Right now Rugbyfactory.tv is simply sharing what they are producing on social media, using Youtube, Instagram, Twitter, Facebook, TikTok, and Snapchat. All of that is accessible for free, and that’s the way it’s going to stay, said Van Niekerk.

“We want to reduce barriers to entry,” he said. “A paywall is a barrier. Watching an 80-minute game, maybe even a seven-minute highlight clip can be a barrier. We want to make the game accessible, snackable and fun to watch.” “It only takes one clip of 30-seconds, to maybe catch your attention, get you interested and then allow you to explore and learn more about the game.”

Building The Audience, And The Library

Right now Rugbyfactory.tv is building an audience and building the most extensive short-form rugby library. Over time, it plans to monetize the short form content through advertising, sponsorship and e-commerce, but not through direct user fees. “We think user fees are best suited for those investing and building their businesses around the 80-minutes rugby game, be it the physical event space, merchandising of rugby content, TV subscriptions etc. We see our efforts as supporting those businesses, to build and grow the audiences, and grow the fan base for live rugby. We can help pull them into the physical venue and onto TV, with our short-form clips.”

In addition, they’re always looking to expand their library. Guthrie has a huge library of classic USA National team, collegiate, and professional content he produced going back 25 years. Rugbyfactory.tv is in discussions with several right holders and content stakeholders for permission to use that footage (which otherwise is unavailable anywhere). “Anyone who owns content and wants to see it presented in the Rugbyfactory.tv form, we’d love to talk to them,” said Guthrie.

Rugbyfactory.tv is bringing new thinking and execution to live and vod rugby content. The development of this company is a result of how sports fans watch sports today and presumably for the next few years. The quick hit, focusing on individual players, the big play of the game, and also the deep dive using short clips to educate fans about the game-within-the-game are all part of how fans and new audiences watch sports.