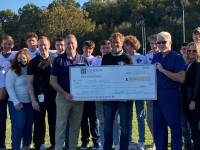 The new rugby fields in Hendersonville, Tenn. opened over the weekend with a ribbon-cutting ceremony tournament and a tournament.

The Sumner County Rugby Pitches were the product of a lot of work and financial support. Local rugby leaders spoke to the local governments about how to get support for the project, and developed a plan to set up two international-size rugby fields. The land is still owned and maintained by the City of Hendersonville, but the local rugby group (mostly Brian Silkwood) dug a well to provide the water for irrigation (saving the City thousands) partnered with a local farmer to execute weed abatement, and in return get priority use of the fields.

"There were some key part of the agreement that made it happen," said Silkwood. "First, they liked that we were non-exclusive, and we were open to having other sports there. Second, I drilled a well to feed the irrigation system."

The non-exclusive agreement, but with priority to one sport, is something that other venues have used in the area. Such an agreement gives local governments flexibility in scheduling sports, but also simplifies things for the priority sport—the priority sport knows it can get space to play just about any time.

The venue has cost some $300,000 to prepare so far, and some additional items—toilets, lights—will bump the cost up over half a million dollars. But corporate sponsorship (each field has a name sponsor) and donations have helped finance that so far.

On Saturday, both fields were in use for a series of 7s scrimmages for Boys and Girls high school teams and some middle school teams as well. Sumner County, Ravenwood Raptors, Father Ryan, Harpeth Harlequins, Riverdale, and Columbia all sent at least one team, most much more than that. The games were full rugby, with tackles, rucks, mauls, scrums, and lineouts.

"We've been fortunate that we got a lot of rain this year and the grass grew in very well," said Raptors Head Coach Richard Boone. "It was a great day."

The schedule was designed to give teams games. There wasn't really a tournament winner or anything like that; it was more designed to get players time on the field as they worked their way toward a championship weekend in November.