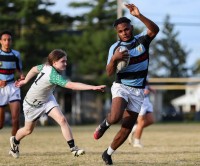 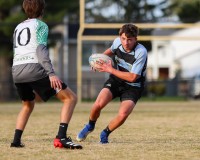 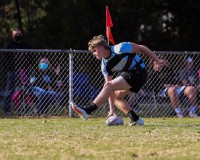 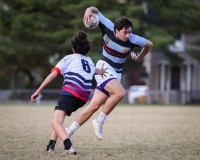 Rugby Maryland is slowly bringing the gamer back on the field, playing some touch rugby league games.

“We’re getting the players who were ready to play,” Joshua Brady interim head of Rugby Maryland. “Not being able to play has been difficult for a lot of them, but they are playing now and having fun. We’ve been trying to figure out the best way to play in the middle of a pandemic and it has worked out.”

Playing touch rugby league has been new for the players and new for the coaches, but it helps to eliminate the rucks so common to union, and thus drop the contact even further.

“Using FIT touch rugby league is different from union but it has a lot of positives, too,” Brady said. “The boys took it it pretty quickly. It’s fairly fun to coach and to referee—I’ve been refereeing and it’s easier to ref than union.

It’s also easier to learn for younger players, and it forces players to work on their catch-pass, and their defense. The big problem in rugby league is how slow players are to get to their feet after being tackles, mostly because the tacklers are allowed to lie on top of them for a few seconds. If you don’t allow that kind of delaying tactic (and you can’t really slow things down with touch rugby) the game can be very quick.

“Once it’s played well it can be played very fast and you need good passing skills to succeed,” said Brady. “In our game if you drop the ball it’s a turnover, so you need to make sure.”

As for results … well the Maryland Exiles did very well and the Minutemen also showcased some solid rugby. But it wasn’t about that. It was about playing, being within the local county and USA Rugby guidelines, satisfying parents that everything was safe, and playing - did we say that twice? Maybe there was a reason.