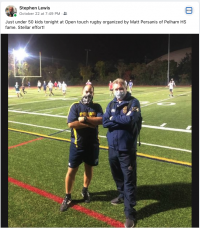 Getting young rugby players on the field has been a challenge for many state governing bodies and leagues as COVID-19 regulations and restrictions are different in different states and counties, and the restrictions are constantly changing.

Those who believe that keeping young people shut up in their homes without much change to get out and be active has its own hazards are trying to find ways for rugby to alleviate that side effect of the pandemic. In New York, where restrictions are tight, they have still found a way to play rugby, albeit a very modified version.

"Attendance has never been higher for our fall programs," said Matt Persanis, who runs Pelham HS Rugby. "There's not a lot of sports going on so we're getting a lot of kids, and the thing it, they're really enjoying it."

Players in the New York City area train and meet to play each week. At Pelham they practice on Tuesdays, and then on Thursdays they invite any kids who want to come to play. They are randomly assigned teams, and some college players (most former Pelham players) also participate, acting as player-coaches. John Powers (Iona), Yohendy Martines (St. Bonaventure), Cian Burns (Albany), Kevin Ndou (Penn State), and Morgan Collins (Delaware) all have done that. And with the coaches encouraged not to do too much hardcore coaching, it's those older players who help develop the younger ones.

The rugby they play is non-contact. Players and coaches wear masks all the time, even when they're playing. They are following the strictest school systems. Teams are randomly put together and they just play. Scores, winners and losers, aren't the focus (although the kids always know). It's about playing the game. The game nights last about 90 minutes and are pretty much constant action.

"Attendance has been great and the enthusiasm has been really high," said Persanis, who credits the coaching and ref help, which has included parents and rugby people working from home due to COVID, with making it fun. "The kids are tired of sitting at home—school is remote, there are no other sports, no parties, no movies. I am getting letters from parents thanking us, saying 'our son was nearing depression because he couldn't go out.'""Because we can't do any contact, no scrums, no lineouts, no rucks, no mauls, we're working on stuff we are able to work on," said Persanis. "I tell people, let's not get caught up in what we can't do, and take advantage of what we can do."

With no contact, they work on their catch-pass. They work on higher-level backline and attack moves. They work on defensive alignment and different defensive approaches. In practice sessions, Persanis throws different backline matchups to force the players to make a read and figure it out on the fly. The upshot is that all of the players are markedly improved in their passing and catching. They are learning more about how to read space and react on defense in the open field.

But more than that, he's hearing from parents saying they're just happy to see their kids playing again.