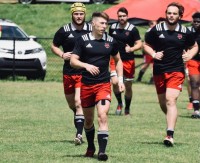 “Not only is he an amazing rugby player, he’s also a very good student, as well as a resident assistant for the Northpark Quads," said Mizell. "He does a great job of managing all those roles as well as being the team captain.

“TJ shows up early and is one of the last guys to leave training. As skilled of a player as he already is, he’s hungry to grow and learn,” continued Mizell. “He’s always looking to build the team up and better his game. On the field TJ is absolutely ruthless. He’s always one step ahead of the opposition and always looking for ways to exploit the opposition. At times, it’s like he’s playing a completely different game and that’s difficult for teams to adapt to.”