As a ballcarrier, leader, lineout organizer, and scrummager, Albert is at the top of his class. Photo Lindenwood Rugby.
05.12.2021 - Alex Goff 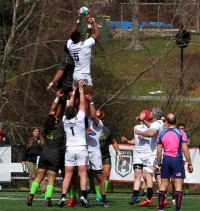 Eagan, Minnesota product Emmanual Albert is a finalist for the Rudy Scholz Award because he has become the foundation upon which Lindenwood's best-ever 15s season has been built.

Quiet but a leader, Albert plays lock and flanker and excels at both.

“With the second and back row providing so much energy and impact to team performance, you hope to be able to pick players who can do a one or two things really well," explained Lindenwood Head Coach Josh Macy. "Can they play in the air? Or maybe create line breaks? Do they smack people on defense or lead from the front? There aren’t many players who can do it all Emmanuel is one of them.

“Emmanuel’s standards in contact training make our entire team better. He’s a bad man in a small space and when we buckle up for contact training, it’s his grid that want-to-be tough guys gravitate toward. Looking at lots of the other players in our team who come on through the year, you can trace some of their improvement to creating those sparks while sharpening irons with Emmanuel.”

Macy remembered how Albert joined the team as a freshman. Quiet, unassuming even, he was warming up with the younger players for a local tournament. The warmup was lackadaisical, but the coaches decided to let it play out and see if anyone among the players raised the energy. That's when Albert spoke up, perhaps for the first time.

"He did not mince words. He reminded everyone that wearing a Lindenwood jersey doesn’t mean a thing without high standards, and that if this group of players wants to earn it in the future it starts right now. As coaches, taking that step back was probably the best decision we made that day.”

“We’ve been locking together since we both arrived and we’re like a married couple," joked Lindenwood captain Marnus Spangenberg. "We call ourselves 'The Combo.' Emmanuel is so reliable on both attack and defense. Our relationship works because of the countless hours of hard work he puts in to better himself. It’s second nature. He is deserving of every accolade he nominated for.”