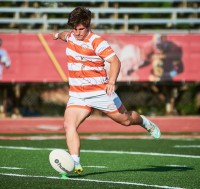 Rockford completed an undefeated season with the win, and in the final ran out to a 28-5 lead thanks to tries from Dolan Harmsen, Gabe Spees, Calvin Schwandt, and RJ Todd. O'Malley helped set those tries up, including one thanks to a chip kick he popped over the Traverse City defense, and O'Malley also converted all four tries.

Traverse City inched closer with two penalty goals to make it 28-11 at halftime, but in the second half Lamancusa torched Traverse City with three tries in quick succession. His speed and elusiveness, combined with O'Malley's accuracy on the conversions, quickly made it 49-11 and essentially put the final away for Rockford.

Traverse City did score twice to come closer, but Schwandt notched his second and O'Malley completed a perfect day with the boot.

This was a huge season for Rockford as they put together enough numbers to run a second side in the Michigan league. That 2nd side did not participate in the playoffs, but it set Rockford up for a solid future.