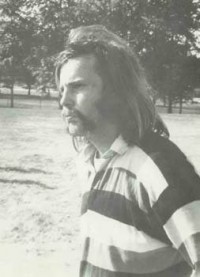 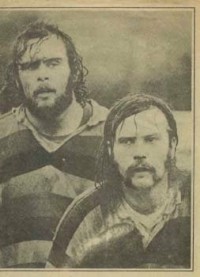 Take a look at the photo and you might not recognize him.

The wild hair and the wild west horseshoe mustache mixing it up in the mud with his University of Maryland teammates is flung far from the white-haired patriarch of Gonzaga HS. But take another look. Look at the eyes. The eyes have never wavered, never fail to bore into the soul of a player, coach, and, occasionally, a referee.

As Director of Rugby at Gonzaga, Kelly has overseen the program as it has gone from a solid single-school high school team into one of the very best, if not the best, in the country. Ranked among the top almost every year. National champions four times, including three in a row, in the last seven years, and boasting 200 players from freshmen to seniors, Gonzaga is a national power; thanks in large part to Kelly.

Gonzaga started playing rugby in 1988, and it wasn’t until 2000 that Kelly joined. His oldest son was a freshman with the Eagles, and dad showed up at practice and offered to help the young coaching staff with teaching basic skills to the new kids. They politely demurred, but as the team got larger, realized it wasn’t such a bad idea.

“They figured the fat old bald guy could be helpful,” Kelly joked.

Support What We Do At GRR. Go To Patreon And Pledge ... Become A Patron And Get Perks And Gifts

Of course, said “fat old guy” had been in rugby for almost 30 years by then. He started at the University of Maryland, and then was a founding member of the Maryland Old Boys, which was a power in the American club game in the early 1970s. He cut his teeth, then, in what was one of the toughest regions in the country at the time, with the DC area boasting several excellent teams.

“The Washington Rugby Club has three Eagles in their backline and we beat them in an overtime playoff game that lasted 100 minutes,” Kelly recalls. “I go back to three-point tries. I want those extra points grandfathered in!”

So when Gonzaga got an eager parent coming in to help coach, they got one with a ton of experience in the game.

Having finished 3rd at the HS National Championships in 1998, their breakout year, Gonzaga was already poised for big things. In 2000 they won the Potomac Rugby Union high school championship, staring a run of 20 straight league titles halted only because in 2020 there wasn’t a championship.

Kelly was a very successful coach, but where he really shone was in growing the program. They started a freshman-sophomore team, reasoning that players came back if they got to take the field rather than waiting for a chance with the varsity. That worked out so well that soon it was an all-freshman team, with a JV squad backing up the 1st 15.

In 2001 they took their first international tour, playing in England, Wales, and Ireland.

“We had a great time,” enthused Kelly. “We’ve been on tour every year since then. It’s a great recruiting tool because rugby gives kids a chance to go abroad. We’ve been all over the place, the kids love it, we get players because of it, and it raises the standard of our game.”

In 2002 Kelly became Director of Rugby, and started to recruit more coaches for the growing program.

Very few high school teams do this, but if they can execute it, it can be a great thing. In 2003 Kelly started a team yearbook, use to recognize the seniors, look back on the season, and act as a fundraiser. What it also did was serve to keep former players engaged. They got a mention in the yearbook, and kept coming back to buy new ones, or advertise.

“It’s a fundraiser, it documents our history, and it will mean something to those kids 10, 20, 30 years from now,” Kelly explained. From that the booster club grew, which Kelly calls one of the strengths of the program. All of these actions were about retaining the Gonzaga Rugby identity. Players felt a part of something huge, and kept supporting it as a result.

The booster club has allowed Kelly to recruit more coaches, and in 2009 he brought in Peter Baggetta, “who has done a fantastic job,” said Kelly.

Can’t argue with that. Since Baggetta became the Head Coach, Gonzaga has made the top four at HS Nationals every year, appeared in seven finals, and won four times. That included a run of 11 straight game victories at nationals from 2014 to 2017, before they were pipped by Jesuit of Sacramento in a dramatic final in 2017.

Overall, under Baggetta, Gonzaga is 24-9 at nationals. Their regular season record is a winning percentage north of 90%, but more impressive is winning 73% of games against the best in the country.

Over the years there have been many special players at Gonzaga, and it's a bad idea to try to list them all. But you'll see current and recent collegiate standouts in Jack Iscara (Cal), Will Lyke (Penn State), Joey Freeman (Penn State), and Patrick Sheehy (Dartmouth). The great Naval Academy flyhalf Jack McAuliffe is there. You'll see Eagle and pro Ben Cima, and NFL standout Johnson Bademosi. Go back a little further and you'll see Eagle scrumhalf Chris Saint, and current University of Arizona Head Coach Sean Duffy.

But there are many, many more who have been hugely influential in the college and club game.

Get Them On The Field

Gonzaga Rugby now boasts about 200 kids in the program. They run a freshman team, a JV, and two varsity teams, with the Black playing most of the local league games, and the Purple team usually playing opponents from out of state. They don’t cut players, but more than that, they find a way to get them playing.

“Some of our greatest success are those kids who aren’t cut and just want to be a part of the team,” said Kelly. “We get them on the field. Every kid plays. For some kids who maybe are not athletically gifted it’s a defining experience for their high school years. Their parents come to watch them play, they wear the school jersey, they’re sore the next day. It’s huge.”

Many of those former players become boosters, and parents of players.

“The culture extends out from the team,” said Kelly. “We learned a long time ago, if mom and dad are happy, then everyone’s happy. We have lots of brothers who go through the program, and in fact in our yearbook we list them all. The parents get together for planned events and they find out that they’re going to have as much fun as their son does. We’re a social group, and everyone feels like they’re part of something.”

It’s also a diverse team. You think Gonzaga as the tony DC-area private school, and it is, but the school also gives out millions in financial aid, and if you’re accepted into the school, you won’t be denied a place because of money.

While, of course, there are plenty of Hispanic and African American kids whose parents can afford the tuition, the financial aid means more of those students can attend. And they play rugby.

Part of the reason they do put on the rugby jersey is thanks to a good relationship with the football program. At the center of that was Kelly, who went on a campaign to show a previous football coach the benefits of rugby.

“He finally bought in,” said Kelly, and you can sense the determination in his voice. “And he said it was OK for football players to play rugby. Then we started to get some African American kids.”

One day Ben Cima was practicing his goalkicking, and Reggie Corbin was impressed, and told Cima he should come play football. Cima, always a right-up-front kind of a guy, said “OK, I’ll do it if you play rugby.”

It was a deal. Both excelled at each sport, with Cima going on to be capped by the Eagles and now a professional player, while Corbin rushed for over 2m300 yards for Illinois. Gonzaga is known for getting acc

Gonzaga’s biggest rival is probably Jesuit of Sacramento. Both are Jesuit schools, and while they are thousands of miles apart, they have played each other frequently at the national championships. In 2019 they faced off in a semifinal that was played over two days because of weather. Since 2010, which covers 10 national tournaments, Jesuit and Gonzaga have met eight times, with Gonzaga winning five times and Jesuit three. Most of those games have been decided by a try or less.

“We talk about being Men for others, and the boys take that seriously and so do the boys at Jesuit,” said Kelly. “We only see them once a year but they are as good as they get. We have tremendous respect for them and a great relationship with their coaching staff. In 2019 when Jesuit made the final and we didn’t, Gonzaga clapped Jesuit onto the field for the final. We look at it that while we’re playing, we’ll try to kick your ass, but afterward, we’re brothers.”

Lee Kelly has logged 51 years in the game of rugby.

“When I started playing I had no inkling that I’d still be involved in it all these years later,” he said. “But it’s been a blessing.”

Gonzaga Rugby would probably say the same thing. Time may have passed, but Gonzaga’s success, and Kelly’s steely glare, remain.