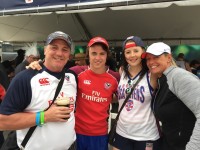 Longtime and high respected coach Tom Schmitt died suddenly of a heart attack January 13, leaving behind a grieving family and many, many players who held him in high esteem.

Tom Schmitt was a former treasurer for USA Rugby, former President of the Wisconsin Rugby Union, and also a referee for the Wisconsin Rugby Referee Society. He played for many years for the Milwaukee Harlequins and then moved on to coaching, running the Marquette University women's program as well as the Wisconsin U23 select side.

He leaves behind his wife, Linda, who is the Head Coach of the Milwaukee Scylla and the St. Thomas rugby teams, as well as daughter Meaghan and son Tyler, who both played rugby in high school and college.

Testimonials to Schmitt's influence have come in from throughout the rugby community.

"Tom was a great coach on the pitch, and an even better person off it," said former player Colleen Cannon. "He helped instill a sense of confidence in me, during a time I needed it the most. One night, in college, I had a tax project due, which of course I waited until the last minute. Tom was on the phone with me half the night helping me through it."

"Under Coach Tom I was given permission to find, cultivate, use and be proud of the power and strength I carry as a woman.  A life lesson that I still carry with me today ... A life lesson that changed the course of my life forever," added former player Bobbie Peterson.

Current Queens University Charlotte Director of Rugby Katie Wurst, who played for Schmitt at Marquette, added: “I owe an incredible amount of my current rugby coaching career to Tom, and the things I learned during my time as an intern for the Wisconsin Rugby Union.  He opened the door for me to be a part of the legacy that is Marquette Women’s Rugby, where I made so many incredible friends, and shared memories I will have forever.  The endless hours planning clinics for high school rugby, setting up coaching workshops, and creating fundraising events are only a small slice of his commitment to serving the rugby community.  Tom made all of it happen, and I was fortunate enough to be a part of all of these incredible experiences.”

Linda Schmitt, Tom Schmitt's wife of 25 years, spoke to Goff Rugby Report about the outpouring of support she has received.

"Tom and I coached together for so many years and there are all those memories I wouldn't have pulled forward had this not happened," she said. "it's been nice to pull out the memorabilia and things that people have given you and look on that and how he impacted a lot of players' lives. That has been really helpful."

"He was a visionary coach and he knew what he wanted and I always was the one with the task of breaking it down for the players," Linda Schmitt said. "We just needed to see what he could see. At the same time he was really good at taking an idea or an approach, especially on a high performance level, and re-framing it for the players."

Today, February 9, would have been Tom Schmitt's 61st birthday.