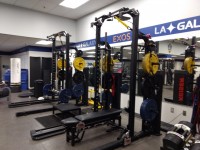 Player welfare is a big part of the new LA 7s at Dignity Health Sports Park, and several changes are going to make the event more popular with the players as a whole.

1. The field is grass and full width, something the USA stop on the Sevens World Series hasn’t had since 2009.

2. Each team will have set-aside locker room space. All of the spaces will be in real locker rooms used at the stadium for football or soccer teams. The USA gets a special space, using the locker room reserved for the USA National soccer team.

These are nice locker rooms with real lockers and access to showers and a dedicated space for each team.

LA 7s February 29 to March 1 at Dignity Health Sports Park in Carson, CA. Go to LASevensRugby.com to buy your tickets.

3. Players will have the entire tennis stadium to themselves. The USTA tennis stadium at Dignity Health Sports Complex is right next to the rugby stadium, and in fact can be access directly from the rugby area. Players don’t have to leave the stadium to get to the Tennis arena. They just walk from the locker rooms directly there.

The tennis court will be covered with a tent and used as the place for the teams to eat. Then the spectator club suites in the tennis arena will be set aside for the teams —one per team— so that players have a place to relax, meet with coaches, and study film.

Tournament Director Dan Lyle says that the players are one of the stakeholders in the tournament.

Lyle said the tournament thought about using the tennis arena as a hospitality area, but opted instead to reserve it for the players.

“We said let’s really make it into the player zone,” he said. “It just allows us to … to not worry about it.”

It is very difficult to house and take care of 16 international rugby 7s teams at one time. Venues are constantly figuring out how to do it. Lyle said that player welfare has been on his mind for some time, and finding a venue that the fans and the players love was key.

Go to LASevensRugby.com to buy your tickets.