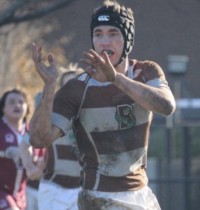 The foundation of Brown University's strong showing in the fall is heavily dependent on youth rugby.

While Head Coach David LaFlamme has some a superlative job guiding his team to an Ivy League title, the influx of talent that understood the game and know how to make the most of their talents certainly helped.

When we spoke to Campbell O'Conor about Brown's resurgence he mentioned how many players had come from rugby backgrounds, despite (or because?) of their disparate backgrounds. A Midwesterner himself, O'Conor got his start with the Wapiti program in Chicago.

"I started playing Rookie Rugby in Chicago with a couple of coaches from the Chicago Lions and Chicago Griffins," explained the Brown backline player. "I've been playing tackle rugby since 6th Grade, which, for the US is pretty early."

O'Conor's father, Sean, actually helped found Wapiti. Since the founding of that the program has merged with the Chicago Lions youth program, training at the Hope Sports Complex and being part of a group that partners with the Chicago Hope Academy. The idea of starting rugby players young has helped those young kids form the new generation of major club players in the city, as well as college players throughout the Midwest and further afield—places like Providence, RI.

"I loved it," said the younger O'Conor. "We learned the basics; my dad was big on teaching the basics. I brought kids out from my grade school and we got started with the foundational elements of the game with Wapiti. We had other coaches, like Dave Clancy (now with the LA Giltinis) and Lou Raymond (Illinois Tornados select side). And once you get high-level coaching like that giving you the foundation then you start to grow from there."

Learning the laws is important, but, too, O'Conor said Wapiti taught hm the fun and the culture within the game. That was always the way.

And you bond over them.

"Rugby brought us together like nothing else could," O'Conor explained. "Like there's this person I never would have met, but he's a great dude I still see them all around. I was in Chicago for just a couple of days and I ran into a kid I hadn't seen in three years. But we're good friends, and rugby brought us together."

The Political Science and Economics major who can play pretty much anywhere in the backline is just one story behind Brown's success, and the story behind him is learning the skills and the culture with a youth program like Wapiti and the Chicago Lions.

Think you have a player who should be in a player spotlight? Tell us about that player here>>