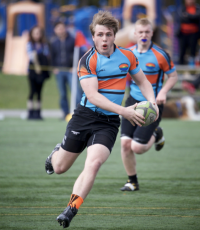 A season cut short was especially frustrating for Central Washington, because the Wildcats looked poised for one of their best seasons.

“We were having a super good year,” said CWU center Jack Wendling. “We have great coaching here, and the program is amazing. We did shock a lot of people, I think, and we showed up well. Beating Arizona at Arizona was the biggest game of the year for us. After that game we all looked at each other and said: ‘we are a lot better than people thought we were.’”

(They noticed on campus. The men's rugby team was named Central Washington University won the school's athletics Moment of the Year for beating BYU, and Head Coach Todd Thornley was named Head Coach of the Year.)

Central played the last game of the D1A season, beating Army on March 11, and then everything was shut down. For Wendling, it’s now a situation of staying in shape and spending time with his family in the Bellingham area north of Seattle, where he got his start.

“I started playing rugby super young,” explained the CWU center. “Chuckanut has a great youth program and being so far north we’d play in Canada. It was fun and that was really what it was about. That’s always been a part of it for me, playing rugby for fun.”

Wendling also enjoyed his football, and thought about which sport would be his sport of choice as he moved out of high school.

Throughout that time, Wendling had also been training with Eagle Impact Rugby Academy, and he toured with that program and then on through to the High School All Americans. It was on one such tour that he realized what he wanted.

“We went to France my senior year, and I just loved how high the competition was, and we’d see the stadiums there,” he said. “I was mind-blown. “I realized this was definitely something I wanted to do. The idea of traveling and being part of a world game was really appealing.”

It’s the overall experience of rugby that sucked Wendling in.

“EIRA was one of my favorite experiences,” he said. “It was go up to British Columbia so fun. The coaching is phenomenal, some of the best coaches I’ve had in any sport. Coaches like Salty Thompson, Brendan Keane, and Scott Bracken were phenomenal guys. You can tell they care. I think every coach cares about the players, but those guys put so much time into it. It’s more than just rugby with them, they want to develop us to be good human beings.”

Watch out for this player, and his team, Central Washington, next year. If they get back on the field, they have some unfinished business.