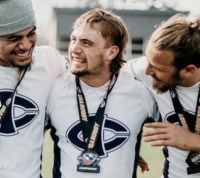 Actual rugby games in America may be few and far between but already Dakota Southworth made his presence known.

Iowa Central Community College’s metronomically active flanker was the player of the game in last week’s outing against Iowa State, and received kudos from both coaches.

“Dakota Southworth is a relentless worker who strives to be better every day,” added Tritons Head Coach Brent Nelson. “He has improved in all facets of his play since stepping foot on campus last fall. He was a phenomenal athlete in high school who could have also wrestled or played football at the college level. Fortunately for rugby, he chose our great sport instead. He has a chip on his shoulder, too, but the good kind. The kind that drives him on a daily basis.”

Southworth played rugby in Cedar Falls, Iowa.The Iowa HS league is a 7s only league—it’s basically an all-single-school league which gets kids playing quickly by having them play 7s and making the rules relatively simple. It’s been enormously successful, but it has its drawbacks, as players enter college programs unfamiliar with 15s.

“Some of my friends were playing rugby, mostly from the wrestling team, and they told me about it and I thought it sounded like fun,” Southworth recalled. “Every practice I started to like it even more. It took me a while to understand the rules—coming in I had zero knowledge of rugby. But it started to click halfway through my sophomore year.”

Cedar Fells wasn’t a championship team, but with Southworth and his buddies on the squad they started to improve. His sophomore year they just missed the state playoffs. A year later they made the playoffs but lost in the first round. His senior year they made the state final.

It was in that junior year that a coach pulled him aside and asked if he’d thought about playing rugby in college.

It was, indeed, a thing, and a15 months later Southworth was enrolled at Iowa Central and making the adjustment to 15s.

“I would say that's the only knock on him is that he didn't grow up playing 15s,” said Nelson. “That's why he makes every drill and every rep count. He is constantly learning and growing in this game. He has improved in all facets of his play since stepping foot on campus last fall.”

“It was new to me the idea of putting two guys or more in a ruck, what’s that about?” Southworth told Goff Rugby Report. “There’s not as much space and there’s a lot more ground and pound.”

Fitness from 7s doesn’t always translate to 15s, but Southworth said he usually ended a 7s game feeling like he had more to give, so he just  kept going in the longer 15s game.

“I felt I had something in the tank; I did have to improve on stuff like counter-rucks and making players in right spaces,” he said. “But while I did that I always knew I could put in the effort. I may not be the most talented guy, but as long as I push myself to the limit—that means a lot to me to do that every game.”

“His nickname is ‘Chuck’ after Chuck Liddell, the UFC Hall of Famer, and he is just as terrorizing,” said Nelson. “Chuck sets the example for the team to follow. Our players and coaches know they are going to get the very best from him every training session, every practice rep and every play in every match.”

He’s also an excellent teammate who leads by example.

A Practical View To The Future

As for the future, Southworth said “I try not to get too excited about things one way or another.”

He had been looked at for the USA U20s but was, at the time, a bit on the light side for his position. As he grows into his role, he has the potential to make an impact at the higher levels.

He is nothing if not practical. Studying heating and air conditioning at Iowa Central, he will earn his Associate’s Degree in Heating and Air Conditioning Technology. It’s a smart and real-world option for the young flanker, who understands that if he joins a four-year-program, or goes to play for a club, or signs on with a pro team, he will be able to work in what is a high-demand field.

“I know that wherever I go, hot or cold, I will be able to get a job,” he said. “I can focus on that and as far as the rugby goes, I can keep putting in the effort and go with the flow.”