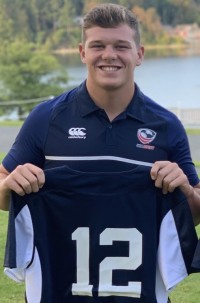 Our latest player spotlight is a player who is hugely influential in the Southern California high school scene.

Brett Dowgiewicz is a playmaker, who has the vision to play flyhalf and the power and athleticism to play center. A High School All American and Eagle Impact Rugby Academy standout, Dowgiewicz also played for the NA Lions in Dubai, where he played at prop and hooker for the sevens team.

But right now, he’s worried about Wilson High School, and winning their conference and getting to the Southern California Varsity White playoffs.

“We’re looking good,” Dowgiewicz told Goff Rugby Report. “We’ve recruited a lot from football, and those guys may not know a lot about rugby but they bring the aggression. We’re luck to have Tony Balasuriya as our coach. We knows so much.”

But at the same time, the experienced players on Wilson can help, too. That often means Dowgiewicz and scrumhalf Peter Sio. They can speak their teammates’ language a bit better, and that is part of the value of good on-field leadership.

That leadership has been recognized by Cal, where Dowgiewicz will be playing his rugby next year.

Most players will say they will play any position that gets them on the field, but they all also have their preferences. Dowgiewicz is playing flyhalf for Wilson, and he was a prop and hooker in sevens.

“I really enjoyed playing for the NA Lions,” he said. “It was different for me, and also when we played for the High School All Americans we played just against Canadian players. In Dubai we played against players from all over the world, top competitors. I loved that experience.”

When the SoCal Varsity White season is over, players switch to playing for high school clubs. Dowgiewicz is a Belmont Shore guy and he will transition to that club later this spring, moving, likely, from flyhalf to center. And it’s center where he feels most as home.

“It’s hard to run the whole show at flyhalf,” he said. “I see myself as a hard runner and that makes sense for inside center. So if I had to pick a primary position it would be center.”

Center or flyhalf, Wilson HS is an a good position to challenge for a Varsity White title, and in the SoCal club season, Belmont Shore could challenge Back Bay for the title.

Meanwhile, there’s a little detour for the LA Invitational, where Belmont Shore will be represented in several brackets.

“We’re going to play at the LAI and the NAI 7s and I’m really excited about that,” said Dowgiewicz. “Playing teams like EIRA, Utah Lions, Arizona … it’s super exciting and it’s a big challenge. I am really looking forward to playing in LA. In Vegas, I liked the atmosphere, but the fields weren’t watered and they were tough to play on. This LAI tournament feels different—it will be better for us.”

Better for Brett Dowgiewicz is good news. A smart, hard-nosed player who has the rugby nous to run an offense and the physicality to mix it up in the breakdowns, too. Is he the whole package? We won’t burden him with that assessment, but keep an eye on this guy, because the package is pretty good.