Peterson Looks to Another Massive Challenge

Peterson Looks to Another Massive Challenge 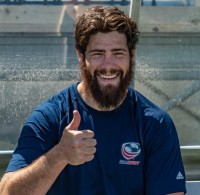 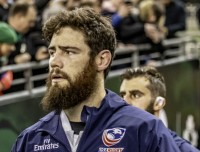 Sunday’s test match with England at Twickenham was a battle, to be sure, and a result that the USA should be proud of, but, said Eagle lock Greg Peterson, the American team should remember one thing:

“We didn’t actually win that game.”

Oh, don’t get Peterson wrong, he’s impressed and he should be.

“It was a really good second half and we’re pretty proud of what we were able to do and do it at Twickenham,” said the Australian-born Peterson who has played professionally in Australia, Scotland, France, and, now, England. His latest season at Newcastle was probably his best simply because he got to play every week. He was the primary target for Newcastle’s lineout, and one of their best defenders.

That has set up Peterson nicely for a summer with the USA team, a team he qualifies for thanks to an American grandfather. But the team itself hadn’t been together for over a year and-a-half.

“It’s always tough to come together when we haven’t in a while, but [Head Coach] Gary [Gold] was very proactive in getting us on Zoom and going over our patterns and our ethos,” said Peterson. “We understood what we needed to do, all we had to do was apply what we knew on the rugby field. With that approach, this is one of the better assemblies we’ve had.”

So watch for more pre-assembly Zoom in the Eagles’ future.

As for the game, they started to apply those lessons in the second half, and Peterson said that after the game, USA consultant coach Neal Hatley told him that England hadn’t conceded a maul try at Twickenham in 48 games, and the USA scored two.

Even if this was an inexperienced England team, with 12 debutants, added the Eagle lock, “England has 1000s of players to choose from and they have a lot of depth. We had some debutants too.”

All positives aside, though, we are talking about a game the USA lost by 14, and a game where they were 26-3 down at halftime. The USA team was defending much of that first half, but that was kind of their own fault.

“We made some glaring errors in that first half,” said Peterson. “We didn’t have the ball a lot but we also squandered some of the possession we had. We had a couple of defensive lapses and I think we didn’t play up hard the way we needed to.”

In addition, there’s only so much time to get the work done, and the USA’s setup for their box kicks was, as Peterson put it, “ragged,” which was one of the reasons why they gave away a try on a blocked kick.

Ireland is up next on Saturday, and it’s a short turnaround, which a rest day on Monday and really only two days this week to put in a hard day.

“We’ll be playing one of the best national teams in the world at their home and we know Twickenham was tough, and Aviva Stadium is almost as difficult,” said Peterson. “But as a forward pack we put in a good performance against England and the last time we played Ireland I thought the forwards did really well. It’s going to be a tough game and I think I’ll struggle to walk off that field on Saturday.