World Rugby will be addressing how to deal with transgender athletes in an upcoming forum and review of the topic.

According to a release by World Rugby, they will be "consulting with expert voices and the global women’s game ahead of a ground-breaking forum next week that will pave the way for a comprehensive review and evidence-based commitment to rugby’s policies relating to transgender players, reflecting its mission of inclusivity while promoting player welfare."

The issue here is not easily addressed, as athletes with fluid gender identity (or set gender identity for that matter) look to findthe right place for them to play. Goff Rugby Report discussed this topic some years ago, spelling out the difficulties to come:

The topic popped up again when transgender student-athlete Jean Kim tried to play for the Fordham women's rugby team.

Now World Rugby is trying to address the issue of whether an athlete needs to undergo sex reassignment to be cleared to play for one side of the game (men or women) or is it just about how a person identifies?

"There is growing recognition of the importance of autonomy of gender identity in society and all sports are currently evaluating their policies to ensure that they are fit-for-purpose in the modern sporting and societal landscape," said World Rugby Chairman Sir Bill Beaumont. "Rugby is no different and this forum makes it possible to explore the best available evidence and hear the relevant expert opinions."

The forum in London will bring together independent experts and leaders in the fields of sports science, biology, medicine, ethics and law as well as rugby administration, medical and playing representatives to discuss the current sporting and societal landscape, rugby’s mission and defining principles.

How many of those reading this feel nervous that these "experts" will screw it all up?

There are some issues to address even as those who bring up said issues find themselves attacked. The key issue is this: humans born as male, regardless of how they identify later in life, are much more likely to be bigger, stronger, and more muscular. Everything from muscle mass to head size to collarbone size and pelvis size is different, with those born male being bigger and stronger.

(Look at the image of Jean Kim with the Fordham team. Kim is in the back row, third from the right. Observe Kim's shoulder width, height, and head size, and try to avoid the conclusion that putting her on the field could be dangerous to other players. Image can be seen here.

The scientific facts surrounding body size are a critical component in evaluating who should play a full contact sport for women, which rugby undoubtedly is. This article from Fair Lay For Women spells it out:

The article shows how when you measure strength related to power and explosiveness (so not endurance or pain threshold or mental strength) men outperform women by a wide margin. The implication is clear. If you put a man on a rugby field with women, those women could get badly hurt. And the science says that it's more about how the body is formed originally than it is about how much testosterone an athlete has in his or her system at any one time. 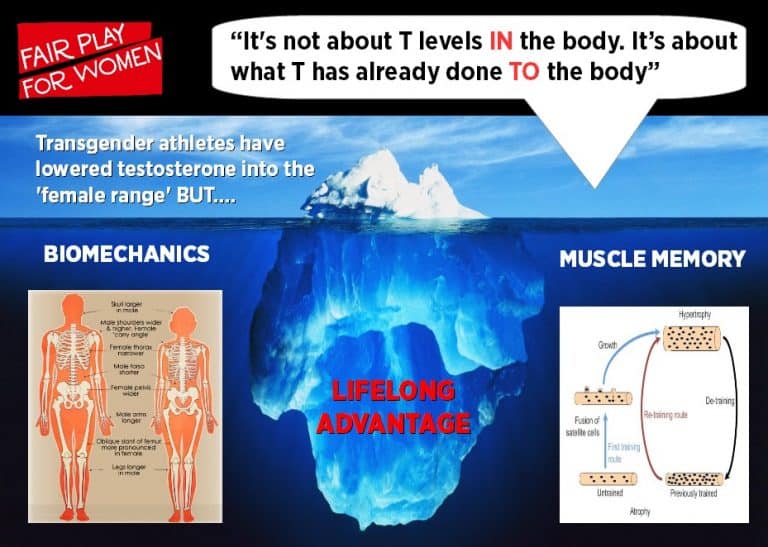 And that's where World Rugby and the sport as a whole has to tread lightly. Yes, rugby is inclusive and should remain so, and athletes from all diversity of lifestyles should be welcome. But opening the door to biological males who identify as women will see fewer girls play the sport.

"The fundamental objective of the meeting is to understand the relevant expert and game opinions and understand how we can strike a balance between inclusivity and fairness in a rugby context," said Dr. Araba Chintoh, Chair of the transgender working group and World Rugby Women's Executive Leadership Scholarship recipient.

Ideally that means that all players, regardless of gender identity, have a place to play safely.

Could it be that men's rugby changes to being "Open Rugby" and women's rugby remains women's rugby? It's a possibility, but only on of many. Players, coaches, and stakeholders should remain vigilant about this topic, because, you'll forgive me for saying that when I hear "experts" I start to get nervous.