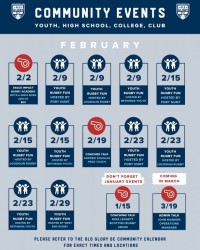 The Old Glory DC Major League Rugby team has unveiled an ambitious plan to support the game in communities around the region.

Throughout February, Old Glory will be supporting youth and high school events, some being high-level skills clinics, and others being rugby days designed to increase interest among young kids.

Ten rugby fun events are slates for days throughout the month. There will also be an Eagle Impact Rugby Academy event on February 2, and a coaches talk on February 19 with Old Glory Head Coach Andrew Douglas.

Tim Brown, who is head of Player Pathway and Youth Development for Old Glory, said he has much leeway in presenting Old Glory as a resources for teams and organizations around the DC area and even nationwide.

“Being out in the community has already produced multiple players on our 30-man roster while still managing a steady stream of community events,” said Brown. “Paul Sheehy and Sheehy Auto have been huge supporters of this initiative.”

Sheehy, who is a club owner and also owns Sheehy Auto Stores, said that a presence among fans is hugely important for Old Glory.

“Community engagement is at the core of everything we do at Sheehy Auto Stores,” said Sheehy. “We hie locally, service our community, and ultimately give back to those communities. The rugby community has always been support of our business, so it is only natural we would support this grassroots effort.”

Sheehy noted that all of his children have player youth rugby.

“It’s where it all starts,” he said. And he points to the rise of Aaron Gray as a recent example of grassroots efforts in the DC area. Gray played rugby at Pride HS, DMV 7s, Kutztown, and now he will be with the USA Falcons going to Fiji.

For more on the Old Glory community efforts, check out their community page here>>