Now For the Women: How Can Eagles Medal?

Now For the Women: How Can Eagles Medal?

The Olympic rugby competition continues tonight for US-based fans with the women’s competition kicking off, and the USA has a real shot at a medal here.

With a fairly decent run of form, the Eagle women bring a diverse combination of speed, elusiveness, aerial ability, and power. Whether they can put that all together remains to be seen, but the indications are they should.

We will know in the first couple of games, to be sure.

At 9PM ET the USA plays China, followed by a 5AM ET match with Japan. Now neither China nor Japan are especially strong—they have their moments and they have their strengths but, really, the USA should beat them. That’s not the issue. Keep an eye, instead, on how the Eagles win. If the Americans crush all before them with a shutout or close to it, if they score at least four tries and don’t take a brain vacation in the second half. If they avoid stupid penalties, poor execution, and missed tackles, then you can start to feel confident of their chances.

But a win, even something like 29-17, could be cause for worry. When the USA team does poorly it’s because they try to do too much, they don’t use their teammates, they get into penalty trouble for no reason, and they start to rush, which results in dropped passes and players being out of position.

But, a calm, intense approach where the Eagle players don’t try to do it all themselves and use their teammates should not only beat those teams, but also Australia in the final pool match (9:30pm ET on Thursday).

In Cheta Emba and Jordan Matyas the USA has two forwards who also have decent breakaway pace and an ability to win ball in the air. In Abby Gustaitis they have an all-around quality player who is a leader, is excellent getting restarts, and can do all the other things you need her to do around the field.

In Nicole Heavirland and Alev Kelter who have played who are elusive, can pass and kick, and can defend those interior channels. Kelter has a uniqueness about her and she relishes the contact. If she can avoid too much penalty trouble she’s among the best in the business.

Lauren Doyle and Kayla Canett have found roles as players who keep defenses honest. Concentrate too much on the outside and they will slice through the gap you just left. Bite down too quickly and they offload to a free player. Doyle’s play in this area has, of late, be very strong, and defensively she’s hugely important.

Naya Tapper, Kris Thomas, Kristi Kirshe, and Ariana Ramsey are, for want of a better term, the speedsters, but it is more complicated than that. Ramsey, to start with, is a young player who we hope will get some time to get minutes in these opening games. Thomas and Tapper have moved, over the years, from out-and-out pace players to those who deal with contact a lot more, mess up the opposition ball, and who are multi-dimensional. That’s not to say Kirshe isn’t multi-dimensional, but if there’s one player the Eagles can give the ball to and say “Godspeed” it’s Kristi Kirshe.

And that leaves … Ilona Maher. Powerful enough to be a prop and just smash people, she’s quick enough to beat most defenders on the wing, and skilled enough to be caught in the middle of the line and handle herself. She’s a somewhat unique player in the game, and if she gets enough ball and also doesn’t go into it thinking it’s all on her, the Eagles should be fine.

The Olympic Women's Rugby Schedule (please subtract 13 hours for Eastern Time ... 10 hours for Pacific Time. So games played in the morning in Japan will be seen in the evening of the previous day in the USA) 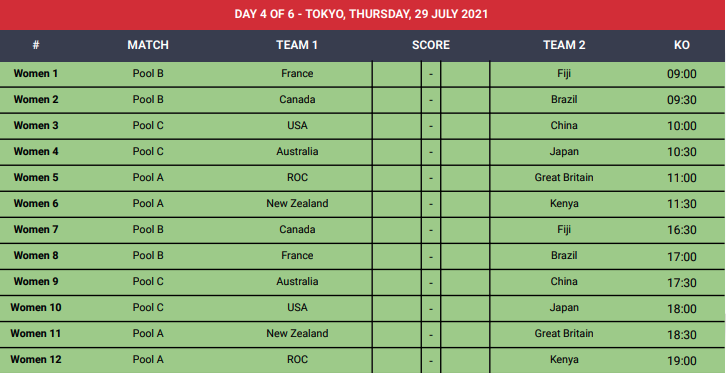 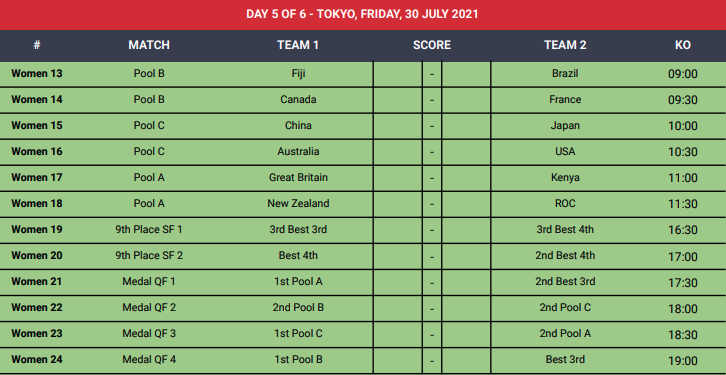