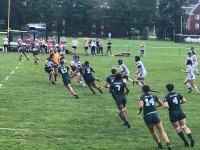 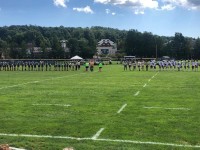 For Dartmouth, center Lilly Durbin was once again an offensive force, as the 5th-year senior and former Fallbrook HS product ran in three tries.

The game was a bit of a forwards' battle in the first 20 minutes, but as time wore on Dartmouth started to find more space in which to move. The Big Green forwards worked nicely with the backs and it was those quick little passes from player to play that kept the Quinnipiac defense having to switch focus.

Dartmouth's back row caused Quinnipiac plenty of problems, and when there was opportunity to spin it wide, the Big Green backs were deadly.

That puts Dartmouth at 2-0 while Quinnipiac drops to 1-1. Also in NIRA DI action, Harvard slammed Long Island 109-5. Harvard's speed out wide was too much for LIU.

PK Vincze with her first try of the season!

The Mount St. Mary's vs Brown game was postponed. So after two weeks here's how the DI standings look (we made a change as officially Army's OT win over Brown was a tie)

NIRA's DII has not had any league games yet, but DIII has had two, with University of New England winning big last week, and Bowdoin pulling away from Norwich to win 53-10 this week. Molly Petronzio scored four tries for the Polar Bears. Adrian College did play, but it was a non-league clash with Davenport, won by DU 24-5.

It's early days but here's how the DIII standings look: