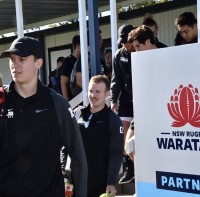 The NIKE Legion Selects, a high school aged touring side, warmed up with games against SoCal EIRA and the Arizona Bobcats before playing in the Great NW Challenge. Following that, the team traveled to Australia for an 11-day tour.

The team consisted of 28 of San Diego’s top players and was coached by Ethan Willis, Ian Denham, and Kalei Konrad. In partnership with the Legion, the Selects had training sessions with Legion Head Coach Rob Hoadley and Legion Academy Director and USA Legend Zack Test.

"The NIKE Legion Selects tour and the partnership with the Legion was a natural progression for us," said NIKE Camps Director Ethan Willis. "Our goal has always been to give players opportunities to develop on and off the field by providing them with top level coaching and the chance to compete and react in challenging environments."

The tour was also a win for the Legion.

"The collaboration between Nike and Legion is a key initiative to bring the best San Diego high school players together to form a high-performance program," Legion executive David Pool said. "The collaboration with NIKE Camps will continue to be expanded to provide young players access to Legion coaches and Legion players to ultimately improve youth rugby in San Diego."

The NIKE Legion Selects program plans to expand programming in 2020 with another international tour and domestic matches.