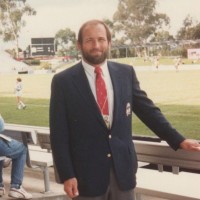 Former USA Eagle and USA Rugby Chairman Neal Brendel has died after a battle with mesothelioma, he was 66.

Brendel was a huge figure in American rugby throughout his life. He played for the Pittsburgh Rugby Club through the 1980s, a club he was later to serve as president, and was capped by the USA during that time, suiting up for the Eagles at prop in the 1987 Rugby World Cup.

An accomplished attorney, Brendel served on the USA Rugby Board of Directors and held several executive posts becoming Chairman in 2002 and holding that position until 2005. In 2017 the US Rugby Foundation presented Brendel was presented with the Craig Sweeney Award for his contributions to the game.

He held board and chairman positions with the Virginia Rugby Union, the Pittsburgh Rugby Club, USA Rugby, and the US Rugby Foundation.

A statement from the Pittsburgh Forge President and CEO Billy Gordon said this:

"His impact on our club, our sport, and our community cannot begin to be quantified, and his presence will be dearly missed.

"In honor of Neal’s legacy both on and off the field, the Forge is proud to establish the Neal R. Brendel Scholarship Fund, which in conjunction with the Brendel family will annually award grants to local high school rugby seniors who will be continuing their rugby careers at the collegiate level. We hope to fund this endowment with your support, which is crucial to enabling this fund to live on in perpetuity, and to continuing to honor Neal’s lifelong commitment to the sport of rugby."

See more about the scholarship at: pghrugby.com/brendel-scholarship.