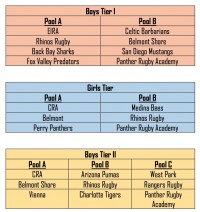 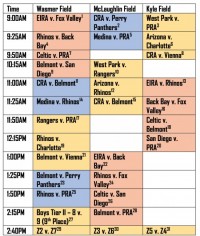 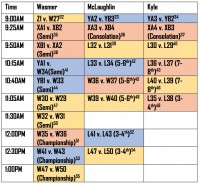 The National Sevens Youth Rugby Championships is set to kick off Saturday, June 12, in Cleveland, Ohio.

Twenty-three U15 7s teams from all over the country will face off at the field of St. Ignatius HS.

The Boys Tier I bracket will see two pools of four teams.

Boys Tier I Pool A

Eagle Impact Rugby Academy is a select-side program that built itself from clinics working on basic kills to creating touring teams. EIRA has been touring with U16 and U14 players for some years, moving through a program that starts with basic skill execution and then embraces the travel-team and touring nature of the game. Highly talented and very skilled they are a team to watch.

Rhinos Rugby is out of Southern California and brings together players from the Irvine area just outside of LA. One of USA Rugby’s National Development Programs.

Back Bay has been producing strong players out of their youth program for years. Tough and physical, this Southern California team will be very tough to handle. Noah Tuiolosega proves a ton of experience, Jason Vincent is a physical presence, and skipper Manoah Faupusa leads by example.

Fox Valley is a well-established youth program out of Northern Illinois, well west of Chicago. They emphasize core skills and can always be relied upon to play the right way.

Boys Tier I Pool B

San Diego Mustangs bring together many of the very best young players of the southern end of SoCal. Watch out for captain Spencer Huntley.

Celtic Barbarians bring players together from Texas, Oklahoma, Florida, and Ohio, although momst of the players come from Texas. They have produced championship teams at older levels.

The 2019 Los Angeles Invitational U14 champions and a veteran program of the NAI 7s, Belmont Shore is skilled and exciting to watch. With the likes of Josiah Apisala, Lenny Ibarra, and Jasiah Lolesio-Pua they are exceptional at finding space and the basic skills.

The USA Rugby South Panthers have not played together much but their preparation has been intense and they did suit up for, and win, the Tropical 7s U14 bracket earlier this spring. Watch out for Jake Orefice, Jack Merriman, Daron Pigram, Eli Baumann, Dylan Forbes-Roberts, Bishop Reilly, and Sam Wiseman.

There are six girls teams, with three teams in each pool.

Cleveland Rugby Academy is familiar with the St. Ignatius fields as they often train there and are run as part of a vibrant youth community in the city.

Perry Panthers also come out of Ohio (Canton) and played a full schedule through this spring. They are a new face for the other Ohio teams.

The Medina Bees went 10-0 in the 2021 spring season, outscoring opponents 368-40 and winning the Cleveland Cup. They move the ball very well and have pace, but are also very brave in contact. Led by Piper Jackson, the Bees have handled bigger teams well by playing smart team rugby.

You're thinking I'm passing right when in truth I am passing left. @MedinaRugby pic.twitter.com/Ia2vItpR0L

A well-organized Southern California program, Rhinos Rugby branches out into Girls U15 rugby and will certainly be quick and tough to bring down.

The Panthers girls played in the Tropical 7s as a U16 team so many of the younger players did not suit up. This, therefore, is their chance.  Watch out for Ari Pappas, Jera Doyle, Shamyjae Moore, and Makayla Bullock.

Nine teams play in the Boys Tier 2 and so we will see three pools of three.

Cleveland Rugby Academy brings the best of the city to their home tournament and will be tough to beat.

The Tier 2 version of SoCal’s Belmont Shore might be a shade younger and a little bit smaller, but their skill level, led by Sammy Gomez and Jaden Hernandez Salima, is still very high.

The DC Old Glory Major League Rugby team has been working with the Vienna youth program and that has helped build a formidable team out of Virginia. Watch out for Matthew Vojta, Ethan Heim-Captain, Ethan Cash, and Oliver Greer.

A new face on the elite and select-side landscape are the Arizona Pumas. This team has been created from the burgeoning talent in Arizona, talent that has produced national-team players like Ryan Matyas, Brett Thompson, and Dylan Audsley. Watch out for Matteo Conte and Dean Wilkinson in this group.

Rhinos Rugby puts in a second team in this tournament, this one expected to be a little younger.

Charlotte Tigers put their hand up in U15 rugby. The strongest program in the North Carolina city, the Tigers will be seasoned players.

The West Park Shamrocks are tenacious and use a nice combination of power and ball movement to get tries. Runners up in a hugely competitive Cleveland City Cup event, they lost the final by only a try.

The Rangers boys won two out of three tournaments in Texas this spring, playing second in the other event and losing only three tries this year. The same players have suited up throughout the season so this is a team that knows how to play as a group. Watch out for Braddock Smith, Tyler LaCombe, and Matthew Montgomery.

The Panthers program sent three U14 teams to the Tropical 7s and overall those teams finished 9-6. We will see a number of those players in Cleveland including William Wright, Hank Vernon, Luke Sentell, OIiver Creigh, Nathaniel Creigh, Jonah Kaler, and Jadn Hoskin.

See the graphics above left.