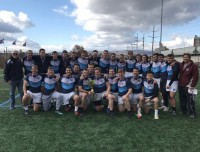 Here's a rundown of what has happened so far.

Montana State won the Rocky Mountain Conference in dramatic fashion, coming back from a 28-7 deficit to beat Northern Colorado 29-28 to win the conference final Sunday.

In the final, UNC scored three tries in the first half and another try just after halftime to lead 28-7. But tries from Connor Eriskcon and captain Jacob Lunsford (his second), to make it 28-17. Erickson got his second to bring his side within a converted try at 28-22.

Then, after a long run from Tommy Pappas, Guy White picked up and dove over for the winner.

Nick Eads, Patrick Hatfield, Mitchell Jaronski, and Brayden Wuebbeling all touched down as Rolla ran out to a 28-0 lead. Caleb Eaton, Jack Tuckwell, and Nick Tompkins added tries as S&T was well ahead throughout.

Villanova defeated Scranton on Saturday and then beat Lehigh 38-15 to win the Mid-Atlantic Rugby Conference.

Memphis beat Middle Tennessee State 27-15 to finish 5-0 and win the SCRC Tier 2. Prop Austin Kelley and flanker Gavin Rawie led a solid forward effort by the Tigers, while center Calvin Gentry scored three tries. Brittin Roedel accounted for the rest of the Memphis points with a try, two conversions, and a penalty goal.

Southeastern Louisiana beat University of New Orleans 39-12 to finish the season unbeaten. SLU and Spring Hill both ended the Deep South Conference undefeated, but with Spring Hill being an NSCRO team, SLU is the top DII team.

Loose forwards Allen Pennington and Cole Stevens worked very nicely together. Nick Montrell has shown a nice kicking game for Southeastern Louisiana, while the bench was very effective for SLU.

Grand Valley beat Oakland in a fairly contentious game to finish off the season undefeated to win the Great Lakes. Josh Lynch had a big game with three tries, cutting back nicely against the defense. Flanker Max Craun-Selma led a solid team effort and front-rowers Dorian Jones and Andy Williams set the tone up front. Sean Mullett controlled tempo, made some good defensive players, and scored two tries.

So that expands the list of conference champions to:

The Rugby Northeast season is down to two teams. Norwich slammed Providence 60-5 on Saturday behind five tries from Nate Rolling and two from Paul Latona. On Sunday, UMass-Lowell faced off with Bentley, and Lowell produced a superb defensive effort to win 20-0. Openside flanker Ryan Jones was excellent and outside center Kyle McPhee was a handful.

Norwich and Lowell will face off next weekend for the Rugby Northeast championship.

The Great Midwest has four teams remaining: UW-Whitewater, Loyola, Illinois State, and Marquette. They finish things off next week.

The Tri-State holds its conference final on November 10. William Paterson beat Marist in a close one 26-19 Sunday to make the final. Meanwhile, RPI upset Kings Point 30-19. RPI had lost in a close one against the Merchant Marine Academy earlier in the season, but did well to reverse the result on Sunday.

So WPU takes on Renssalaer Polytechnic next Sunday in a rematch of a game that WPU won 22-20 a few weeks ago.