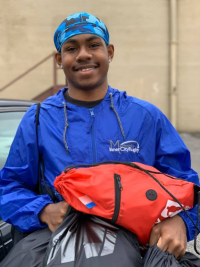 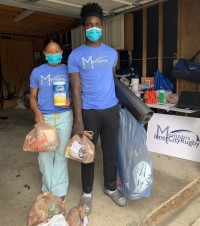 Amid all the talk about not being able to play rugby, it’s easy to lose perspective, but sometimes rugby is more than just rugby, and playing it, or not, has greater importance than just having a good time.

Memphis Inner City Rugby (MICR) has been hugely successful in reaching out to kids in under-served communities, often low-income kids who just need something positive to do outside of school. The program has placed kids in major colleges thanks to rugby, and produced impressive graduation and school-attendance rates.

So the whole point is to use the enjoyment and team ethos of rugby to keep kids away from bad influences and engaged in their education and their future. What happens when you can’t play?

“We are working hard to redirect our resources into food insecurity in our neighborhoods at this time while hoping to get back on the field as soon as possible,” said MICR Executive Director Shane Young.

Since March, MICR has distributed nearly 2,000 bags filled with food, toiletries, and since they also want to promote the positives of their program, they’ve included rugby balls and fitness equipment, too. Many of those receiving these gift bags are families of student-athletes already in the MICR program, but many are not.

Meanwhile, the MICR coaches are taking the rugby to the players rather than having the players travel. The coaches visit students for one-on-one sessions or small group sessions.

One of those coaches leading the way is Jalen Jones. A graduate of the MICR program, Jones was playing rugby and studying at the University of Memphis when he had to leave to get a job to help support his family.

One of this jobs now is using rugby as a community outreach tool.

“We’re working together to get people some food,” said Jones. “But also we’re going to different areas to teach rugby, and that’s gone really well.”

MICR will put out a sign at an apartment complex or a neighborhood saying they will run a rugby clinic or event in a day or two, and invite kids out.

With the COVID-19 lockdowns being especially hard on people who live in low-income or small apartments, getting the kids outside and running around in a safe environment is a priority for families. MICR finds space nearby—whatever they can get.

“We just put the sign out and they come,” said Jones. “They love it. We get to teach some rugby and it’s good for the kids to get out and do something.”

As usual, MICR has managed to take a difficult time and turn it around into several positives. And it’s being noticed. Jones was made a finalist for the Momentum Non-Profit Partners Catalyst Award for his work in reaching out to communities and helping people who are at risk of food vulnerability during the pandemic.