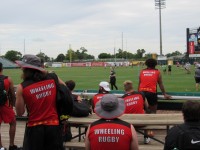 The Men's bracket in the CRC 7s provided several good performances and didn't look anywhere near as rusty as observers expect.

With the top four seeds, Lindenwood, Life, Army, and Davenport, all getting a bye, it was to everyone else to impress, and many did.

Loyola edged Salve Regina 14-12 in a game that was very tight and back-and-forth. Loyola will face Lindenwood on Sunday.

Iowa State put together an impressive performance shutting out Franciscan 34-0. Iowa State's team approach plus some very tough defense saw them through.

Iowa State will play Western Michigan, which also looked in control against Wayne State. WMU was just too powerful in contact and too opportunistic. WMU played mostly 15s this spring but adjusting to 7s didn't seem to cause them any issues.

"We just have to keep a cool blue head, don't get anxious out there on the field [and] stick to the system," said WMU captain Joey Backe.

Lander looked superb in beating Lafayette 45-0. They played well together, defended in an unhurried way, and worked the ball to space nicely. Lander takes on Army, while Wheeling will play Air Force. Wheeling had to work for it over New Mexico Tech 38-12, but settled down in the second half. Air Force just needed patience to break a tough Central College defense. Eventually Air Forcer's superior power and outside speed saw them through.

Lindenwood will take on a Louisiana team that was just too big and powerful for Tulane. Denver did very well to edge a more seasoned McKendree 14-10, while Notre Dame College was all frowns coming off a 17-5 win over Taylor. And it's fair to say NDC expected to play better, but couldn't quite connect on some prime scoring opportunities.

Christendom will play Davenport after looking very good in shutting out Marian. Christendom was faster, passed better, and was quicker to the breakdown than Marian. They also had the player who got the biggest crowd reaction in Owen Kennedy. The converted basketball player is 6-8 and very physical, but he can run and pass too and scored a very nice try on the outside for Christendom.

Despite the scoreline, Christendom can do better, as they failed to really connect on their restarts, where Kennedy would be especially dangerous.

And the last games of the day saw James Madison beat Nazareth 24-5 with superior strength and a vertical game. JMU is student-run at the moment and looked quite cohesive and phyically powerful.

Nazareth battled and deserved their try, but they are young.

Facing JMU will be longtime rivals Mount St. Mary's. The Mount played a very effective brand of 7s, kicking deep, defending cohesively, and quickly getting into a good jackaling position in the rucks. The result was turnovers and penalties for MSM, and tries. Most of the tries were short runs to the line because the Mount just shoved St. Scholastica back into their own end. Scholastica just couldn't get out of trouble, and the Mount kept the pressure on 46-0.

Waiting for a 5:55PM kickoff for their only game, the Mount St. Mary's players had to have been anxious to get started. Head Coach Jay Myles had his players go through a walk-throguh and some yoga and stretching, making sure he didn't have the players idle or climbing the walls, but also didn't run them into the ground.

It worked. Score one for yoga.