Marin and Walcott players pose together after their game.
02.21.2020 - Alex Goff 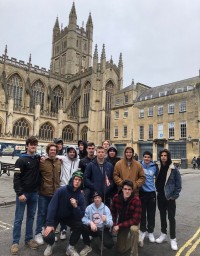 It's been active on the field and off for the Marin Highlanders as they tour England and Wales.

In Bath, the boys toured the Bath Rugby Stadium, followed by a really nicely-run training session with one of the Bath rugby coaches. Next, they were off on a tour of the historic city of Bath, highlighted by visits to the Bath Abbey and the Roman Baths.

Then Marin was on to play Walcott RFC under the lights. This was a very evenly-matched game, and that's a hallmark of Irish Rugby Tours—scheduling competitive games.

The game was played between the 22-meter-lines for most of the first half. Marin's defense was very good, and hooker Joe Calzaretta and prop Henry Minturn led a goaliine stand that kept Walcott off the tryline for over ten phases.

Walcott did slot a penalty goal to lead 3-0 at halftime.

In the second half, Walcott pulled away as Marin made changes. Playing time was more important to the Highlanders than winning the game.

"We brought 32 boys on tour," said Vantress. "And developing every one was a priority for us. We all played all of our younger or less experienced players."

Next up? A Six Nations international to watch in Cardiff.

Go to IrishRugbyTours.com for more.