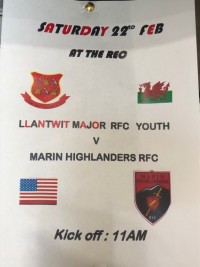 The Marin Highlanders ended their tour of England and Wales with a victory Sunday over Llantwit Major of Wales.

The tour was planned and run by Irish Rugby Tours, and included a slate of competitive games that provided the Highlanders with the right rugby experience.

The team was well-hosted, and capped off a very enjoyable cultural and sporting tour of England and Wales.

They also got to see Wales play France in the Six Nations in Cardiff. It was a classic.

Irish Rugby Tour can plan your tour to rugby countries all over the world.

Go to IrishRugbyTours.com for more.