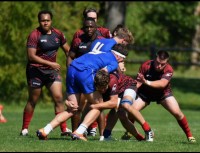 The Mid-American Conference got going this weekend with favored teams victorious.

As has been the case throughout the country, questions remain about which teams can get the numbers to compete. The MAC has started well in that regard with teams able to make their commitments.

Bowling Green shut out Ohio 59-0 and that was probably as expected. Flyhalf Jake Kubicki was excellent both in marshaling the offense and in his goalkicking—he was good on seven of nine.

Louisville defeated Pitt 22-5 in a game where the Cardinals might well have hoped for more. The long travel was somewhat new to Louisville and they struggled to find their rhythm in a tight first half, and that led to some penalties.

"Our discipline was lacking," said Louisville Head Coach Emil Walton. "That's something we need to fix in the coming weeks."

A red card for a no-wrap tackle was perhaps the most obvious example there, leading to Louisville playing 60 minutes with 14 players.

But the young Louisville team started to put it together in the second half. They did see two tries brought back but with Danny Bombard, Reed Terry, and Joel Martin all scoring their first tries for their college. Martin was also excellent on defense causing Pitt all sorts of problems.

Western Michigan had a tougher time with a very capable IUPUI side. The week before WMU saw their captain Ivan Delgado leave the game with a broken leg five minutes into the contest and lost to Notre Dame. Certainly they were shaken up by that injury. This week the Broncos were a little more composed.

"We definitely played better this week," said WMU Head Coach Mark Allen. "We have nine new starters from a year ago, it's a different team and we're just starting to play together. IUPUI is well-coached and we saw film on them from Purdue—I tell you what, they are much improved."

No. 8 and new captain in place of Delgado, Nathan Gay, was a stalwart on the weekend and wing Luke Sutherland was probably WMU's best back.

Will McNamara came on as a sub at lock and was impressive as an impact replacement. His brother Sean is the team's flyhalf and he, too, was effective.

And University of Cincinnati jumped out with a 58-8 victory over Dayton. Ryan Pearce scored four tries to pace the Bearcats, with Nick Marsh, Aaron Organiscak, Zack Cole, Iaan Wheeler, Merrick Greulich, and Jered Busch all touching down once.