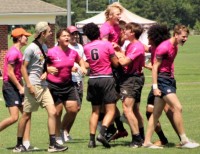 Loudoun County Rugby and a Barbarians team of players from around Northern Virginia took the titles at the Rugby Virginia State 7s championships in late July, with U12s, U14s, and U18s championships on offer on the day.

The Virginia U12 7s tackle final was a bit of a nailbiter and Loudoun County had to work hard to come out of it on top. LoCo was undefeated in pool play but the final against the Barbarians started of with difficulty.

The Barbarians scored right off the opening kickoff, cutting through the middle of the LoCo defense to score under the posts. Loudoun County responded with a try out wide and that is kind of how the game went—one side making a statement and the other responding.

In a tense, physical match the game came down to the final play of the game as the Barbarians came storming back from deep within their own 22. The LoCo cover defense chased and while the Barbarians scored, it was in the corner and the kick didn't make it over. LoCo survived 28-26.

LoCo Player of the Tournament went to Arthur “Pip” White while Jack Fraine's kicking game was outstanding, including a crucial 4-for-4 effort in the final.

“This was the best final I've been involved in during my seven years with Loudoun," said Coach Joe Decie. "Not my favorite per se but the best given how tight the game was and that it came down to the very last act of the game to determine who was the winner.”

Loudoun County toughed it out with a shortened bench. They started slowly in their opener but started to find their rhythm in the second half, beating Washington DC 35-15, and finished with two big shutout wins—prop Nick Kellen was the team's MVP, Luke Hable was their best defensive player, and AJ Dvorznak put in a ton over work.

But in between those results Loudoun faced a tough Barbarians side that had won at the Warrior 7s and also the Maryland Cowpie 7s. With players from Culpeper, SYA, and Western Suburbs, the Barbarians went 4-0, beating WestEnd/SYC 33-10 in their opener.

Then they downed the team that would prove their toughest opposition, Loudoun County, taking that game 19-12. Alex Molina and Roth Schumaker did hard work in scrums, tackles, and rucks, and Denzel Dixon, Dylan Bevilacqua, and Gavin Guinyard all touched down. Guinyard's was the game-winner. Loudoun got tries from Finn Brooks on a nifty kick-and-chase, and Kellen.

The Barbarians were tested by the very quick DC side but as DC's penalties piled up Bevilacqua, Dixon, and Jayden Kunutsor scored and Barbarians cruised 33-19.

The last match of the day was conceded by an undermanned Alexandria side due to the intense heat. Bevilacqua was the tournament MVP, while Amari Baron and Beckett Robinson, who, like Dixon has played with Rhino's 7s program—contributed significantly to the offensive and defensive game.

Baron played through injury and Robinson logged 14 conversions on the day.

The Loudoun County U18s went 4-0 in the U18 bracket. They were captained by Scott Wilkins who, on top of leading the team in some of its most complete rugby performances of the year, scored three tries. Scoring was led by Nicholas White, who notched seven tries, but it was a team effort as the squad worked well in attack, moving the ball well and spreading the scoring across the team.

Taylor Downer contributed three tries, while Tyler Fraine, Chris Scheuerman, and Asher Clark each added two. Patricio Anduaga scored one try and was hugely infuential in how he distributed the ball and made key gains on the ground. Ivan Hager came up big in defense with several try-saving tackles on the wing.

They defeated Fort Hunt 31-12 in impressive fashion to win the final.

“I am extremely proud of the way the team came together and played today," said Coach Matt McNamee. "It was one of the most complete tournament performances that I have seen the team perform and am pleased that it culminated in a title. I am excited to see what the future holds.”