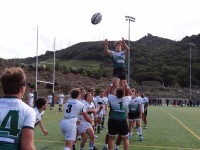 Lamorinda shook up the Northern California, and indeed the national, high school scene with a 36-29 defeat of defending national HS Club champion Danville Oaks over the weekend.

For Lamorinda, this was a huge accomplishment and it’s not a coincidence that a couple of days later Lamorinda was invited to the 2019 HS National Championships.

“We felt pretty good about our prospects for this match,” said Coach Mike Leksan. “These guys have grown up with each other as rugby players and have developed together. We feel pretty good about what we have.”

A couple of years ago, the decision was made at the club to keep the younger players separate from the older players. Basically, freshmen and sophomores remained on the JV team even if some might have been good enough to play on the varsity team.

“It was part of us changing the culture of the club,” said Leksan. “Our JV team went undefeated last year, and because we were able to keep them all together, they just really gelled.”

With a forward pack that played solid defense and moved effectively around the field, and with a talented backline led by centers Miles Beaubelle and Oteti Vehitkite, Lamorinda scored early and shocked the Oaks. Beaubelle opened the scoring by slicing through on a simple crash ball, and Vehicle scored on an interception and also countered on a kick from long range for a try.

Lamorinda led 36-12 with 15 minutes to go, before Danville mounted a comeback that fell one try short.

While the Lamorinda backs, directed by a halfback combo that just understands the game and each other, was dynamic, the forwards simply got the job done.

Captain Alex Cotessis has a huge work rate and leads by example, while hooker Zachary Barker was also influential.

So … watch out for Lamorinda, but Leksan said there’s still work to do.

“We have SFGG coming up and more tough tests this season, but it was a good start,” he said.