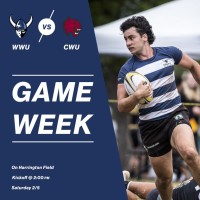 It's tough going in college rugby in the Pacific Northwest, where COVID restrictions have been especially ... restrictive, but one key game is happening as Western Washington hosts Central Washington on Saturday.

For Western, this is a stern test, hosting a top DIA side, and they would have liked to have had a couple of warmup games leading into it. But COVID reared its head and they didn't happen, with last week's meeting with Canada-s Trinity Western called off because crossing the border is so difficult.

"We are finally getting to play," said Director of Rugby Paul Horne. "We're disappointed we did not get our game with Trinity Western played. The team is really looking forward to playing rugby again."

WWU's trip to San Diego earlier in January was also called off, but has been rescheduled for March when they will mix it up with University of San Diego and Yale, who are also making a warm-weather-state tour. But now it's a chilly February and they hope a chilly reception for a very strong CWU team.

Western has played this school year, going 6-0 in the fall, but their last game was an oh-so-close 20-17 win over Oregon in November. Horne said this year's Vikings team is "young and skillful; probably the best set of backs we have had in the 10 years we have been coaching."

The 9-10 combination of freshman Max Stone and captain Terrell Nelson have worked well together to find space for some speed on the outside. They will need it against the Wildcats.

"The challenge that CWU brings will be at a different level than anything we faced in the fall," said Horne.

Head Coach Todd Thornley said the game was crucial for his team in just letting them know there are "consequences for mistakes."

"We have been dealing with weather and COVID protocol interruptions all January so it was nice just to get a full week outside to train," added Thornely. "It was nice to get a hit out against Seattle last week as it exposed a lot of areas for us to work on which the team has been working hard on."

But what does that mean on the field?

"In all honesty, I have no clue how we are going to go as we have a relatively young team given the lack of rugby we played last year due to COVID. But we will work hard for each other and take it one performance at a time."