Just 18, PK Vincze Shoots For Stars And Beyond

Just 18, PK Vincze Shoots For Stars And Beyond

Just out of playing for the HS All Americans, PK Vincze is on the cusp of the senior national team.
11.18.2020 - Alex Goff 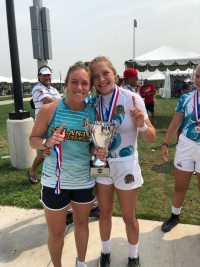 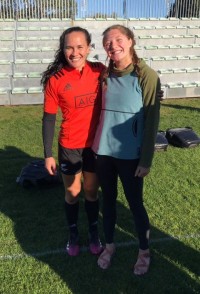 Elite women's rugby is back on the field today with the USA Women's Stars & Stripes game, and while we'll be seeing current and future Eagles in display, one player in particular is being fast-tracked a little faster than most.

At 18 years old, PK Vincze is easily the youngest player on display today, as she will be on the reserves bench for the Stars. Generally when you talk about rugby at this level, players need to be over 18. Vincze just made it, turning 18 this past Sunday. That was the day she arrived in Denver, and she was greeted by coaches with a card and a cake.

An enthusiastic rugby player since middle school, the Breckenridge, Colo. resident and Summit HS product has thrown herself into developing her game. At 15 she spent her summer paying with Bay of Plenty in New Zealand with Mike Rogers of The Inside Running Academy and Cory Sweeny, who coaches the New Zealand women's national 7s team. There she got to meet one of her heroes, Black Ferns superstar Portia Woodman (see photo for proof!).

Back in the USA, she was a HS All American, and was a standout member of the American Rugby Pro Training Center residency program, attending the ARPTC summer residency, and she will be back there again after the USA assembly is over.

A hard-running back and multi-sport athlete (she plays hockey and is quite the fisherman) who plays older than her age, she also starred for Atlantis in 7s as well as the HS All American 7s team when it went to Canada. She was so impressive that USA Women's HP GM Emilie Bydwell approved a waiver to allow her to participate in a mini camp earlier this fall even though she was still only 17.

Small World: In the fall of 2019 PK's father, John, organized (along with the Breckenridge Rugby Club) the hosting of the USA Women's 7s team in Breckenridge as they prepared for the USA 7s in Glendale (which they won). Players were hosted by families, and the Vincze family hosted Ilona Maher. On Wednesday, Maher and Vincze will be teammates on the Stars team.

Tomorrow's intrasquad clash is LIVE and for FREE on @FloRugby.#USAWRW pic.twitter.com/Gkp8BDGW1D

"Being the youngest in the assembly has definitely been more challenging considering that I haven’t been at the DTE programming for the last eight weeks and I’m really learning more of the tactical game play type stuff," Vincze told Goff Rugby Report. DTE would be Daily Training Environment. Vincze was part of a group of 12 backs that did the mini-camp because they couldn't do the entire DTE assembly earlier this fall.

As a young player Vincze will have to work hard to match the physicality of more mature athletes. She said she's aware of the differences.

"I just started playing women’s rugby this summer and considering COVID and everything I haven’t had a ton of experience," she said. "However given the past few days of the buildup I have found that it is very similar to the U18 international level and that I am actually more prepared than I thought."

Surprises should be no surprise to her by now. Being called up to this assembly, which is basically one step below the Eagles, was certainly a shock.

"It was actually a bit surprise to me I was invited to compete at Stars and Stripes," Vincze told GRR. "I was invited unexpectedly to the mini camp as a result of my performance at the U18 regional training day back in March, in which [USA 15s Head Coach] Rob Cain was in attendance. I was also the youngest at the mini camp and had decided to just go out and play and take in as much of the experience as I could considering that I wasn’t at the DTE. I ended up having a pretty good week where we mostly played a lot of mini games competing against other backs and working on some specific kicking and passing technique. I was very surprised to get the call from Rob that Sunday that I had been invited back considering my age and the other experience that was also at the mini camp."

And now she's there, and ready to play.

"Being at the Stars and Stripes event so far has been a big learning curve trying to take in as much of how the USA likes to play and all the little things that come with it," she said. "I feel super ready now and I’ve been able to get a ton of help and mentoring from the upper players and those who were at the DTE, and ultimately I am just here to play so I’m really excited."

PK Vincze has committed to play rugby at Harvard, but because of the COVID shutdowns has opted to defer for a year and will enroll in the fall of 2021 and will suit up for Mel Denham's Crimson team. Who know what will be on her resume when that happens.