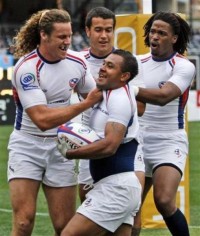 Colorado State University men’s rugby has announced that Jone Naqica will take on the position of Head Coach starting this fall.

Naqica was captain of the USA Men’s 7s team and upon his retirement was the all-time leading scorer for the USA in Sevens World Series events. An Eagle at 15s also, Naqica scored two tries in his debut in 2001 against England. Domestically he was a leading light for both the Denver Barbarians and San Francisco Golden Gate as a flyhalf and fullback.

Naqica began his coaching journey in 2010 as an assistant coach with SFGG  and then transitioned to Head Coach of SFGG’s high school program. During that time he also coaches at Santa Clara University and was SFGG’s men’s 7s team Head Coach.

In 2016 Naqica joined Eagle Impact Rugby Academy as a skills coach, which he still does, and most recently he was Head Coach and Director of the Sacramento Kaji youth programs before moving back to Colorado where he coached with the Barbarians.

In accepting the position Naqica noted in a statement how important is the legacy of former Head Coach Rod Hartley, who tragically died of ALS in 2016.

“I will not forget the foundation that the late Head Coach Rod Hartley has laid down,” stated Naqica. “I would like to see his legacy and success continue to grow within the team as well as appreciating all that Coach Mose Timoteo has furnished.”

Timoteo, a former teammate of Naqica at SFGG and with the USA, was CSU’s previous coach but is moving on.

“I’m eager to make a positive contribution to the program and community and be a good role model to these young men both on and off the field,” added Naqica.

Speaking directly to  GRR, Naqica noted that there will similarities and differences between his coaching and that of Timoteo.

“Mose and I come from the same coaching tree,” he said. “But I’m more of a defensive coach and Mose’s philosophy is more about scoring as many points as possible. But it’s great to follow on to the great work he’s done. I am excited about both 15s and 7s, with 7s in college being taken a lot more seriously. This is a great opportunity and I want to thank the CSU leadership team for giving me thing opportunity to coach college rugby.”