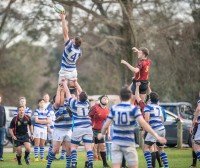 The Jesuit of New Orleans Blue Jays opened up their 2019 league season with a 36-12 defeat of Brother Martin.

Coming off a loss to the Bayou Hurricanes the week before, Brother Martin was looking to get back on the winning side. But, facing the two-time defending Louisiana state champion Blues Jays made it tough.

Jesuit seniors Jack Juge, Cole Roy, Patrick Motes, and Byrne Musser formed powerful core of new players that imposed their will on the Saders throughout the contest. Their brawn was complemented by the leadership and skill of many veteran players, including seniors Will Newel, Daniel Davillier, Langston Goldenberg, and Peter James, to name a few.

The Jays take on the might of Woodlands Rugby Club from Texas, this coming Saturday immediately following the NOLA Gold professional rugby match versus the Toronto Arrows.