Joe Barnet scores for Jesuit New Orleans. And everyone else on his team seems happy.
01.30.2022 - Alex Goff 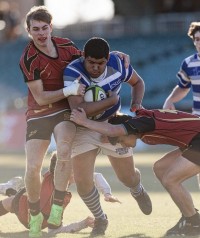 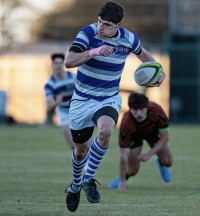 Coming off a 47-12 win over Dallas Jesuit, New Orleans back up that result with a strong showing against Brother Martin.

Junior flyhalf Andrew Newel had a superb game once again, showcasing a nice blend of athleticism, skill, and rugby understanding. His playmaking, elusiveness, and passing kept the Jays on the front foot and he worked nicely with his scrumhalf Matt Cashio.

With a solid platform from the Blue Jays forwards and Cashion providing quick service, Newel had time and space to make his plays. Cashio also showed the ability to exploit space when he saw it and scored a try from 30 meters out when he faked a pass to his forwards and took the gap instead.

The Jesuit forwards showed tremendous improvement from last weekend, particularly in their lineouts, which operated well. Senior hooker Luke Giroir was accurate with his throws and jumper Ben Waguespack was his constant target. Lock Sully Parent was effective on defense and in the clearouts, while No. 8 Conlon Pausina stole ball in the breakdown and was a ground-gainer in tight. Pausina scored as did blindside flanker Quin Amadee.

These big results against teams that performed well last year is less an indication of a dropoff for Dallas Jesuit or Brother Martin, said NOLA Jesuit Head Coach Adam Massey, and more a reflection of where his team is.

"Last year we played St. Paul's and beat them 50-0, but then we just got slowly decimated by injuries and when we saw them later we were very deep into our depth chart," said Massey. "This year hasn't been much of a change for us other than the players we had are a year older. We're just in good form and, thankfully, the injury bug hasn’t hit us so far."

The big change has been two senior football players who have finally joined the rugby team (only to realize they should have done it a long time ago). Joe Barnet (who scored against Brother Martin) and Christian Jackson have taken over the prop positions and have made critical contributions in the early going.

Newel's experience training with a men's club in the fall has helped him and he continues to make smart decisions in his playmaking. Cashio has unleashed a very nice box kick that is able to turn the tables on teams.

One other major change for NOLA Jesuit is that this is the first year that the program is fully varsity within the school. That sort of school support certainly helps and when the Athletic Director attends your game, that, too makes a difference in how the team is perceived. Beating defending state champions kind of does that too.