Since their 2018 debut at NashBash, the Harpeth Harlequins remain the only unbeaten team in the Middle Tennessee Rugby Conference with one week remaining in regular season play. Still showing their strength on both sides of the ball, the Harlequins have put up 174 points for the season so far and allowed 87. Here are highlights of their conference matches to date:

First up for regular conference play for the Quins was the Sumner County All Blacks, who last year gave the returning state champs their toughest match of the entire season. Familiar with the physicality of a match between these two sides, supporters were not disappointed in the intensity of play for the full 60 minutes, as Sumner Co did not let up on their defense, nor their desire to see the try zone. H2 took the first 10 minutes of the match settling into their game and were the first to put points on the board from a tap and go close in after a Sumner penalty. Scrumhalf Garrett Peal would put the ball down left of the posts, and winger Cormac Brennan would easily see to the conversion. Sumner would answer in much the same way after a Harlequin penalty, with No. 8 Ethan Bleau taking crash ball  and ultimately Sumner’s outside center gets the try. A missed conversion puts the score 7-5. The first half would see 2 more Harlequin tries: one from center David Ebert and the other from newcomer, Ian Burr. Brennan would connect on one of those conversion attempts and leave the score at the half 19-5. No. 8 Christian Moolman would take it into the left corner one minute into the second half with no conversion. H2 would see the try zone 3 more times before the end from prop Jake Ellison, Moolman again, and center Josh Ebert. Brennan would end the match with 2 more successful conversions and 1 missed. And Sumner Co’s scrumhalf would take advantage once again from a penalty before time had expired. Final score: 43-12.

Setting the tone early, flanker Jonah Albert and prop Jake Ellison would win the ruck after the initial kickoff to Father Ryan. At the 30sec mark, Scrum half Garrett Peal would feed it to flanker David Ebert at the 22m line, who would run down the right side and eventually score under the posts. Winger Cormac Brennan would see the first of many successful conversion attempts on the night. Another won ruck would allow Albert to pick it up and run the ball into the right corner and set up a very impressive conversion by Brennan. After receiving a deep kickoff by Father Ryan, David Ebert would send it to No. 8 Christian Moolman, who would run it the 30m line, which allowed Ebert to pick it up out of the ruck for another 20m to the 50m mark. Flanker Peyton Arnold would get the feed from Peal and burst through Father Ryan traffic to carry the ball 50m for a try under the posts and a conversion. Another 6 phases sees Albert once again down the right side to score H2’s 4th try at the 14-minute mark of the first half. Brennan’s kick hit the posts and denied H2 another 2pts. The Harlequins would see the score move 2 more times before the end of the first half: David Ebert seals the deal after many phases from a lineout deep in H2’s end of the pitch and Peal keeps the ball out of a ruck at the 50m line to put together an impressive run to the far right corner. ‘Scormac’, as he has been named by his coaches and teammates, puts up another difficult conversion to bring the score at the half to 40-0.

The Harlequins substituted generously, and cleared their bench before the night was over. Father Ryan’s 14 points would all be the result of solid play by their #9, Reed Robinson, who was high tackled as he was about to find the try zone. A penalty try was awarded by referee, Haliee Sells. A lineout at the Quin’s 24m line gave Father Ryan an opportunity to show their mauling skills, and Robinson would take it from the maul to set it down in the far right corner, after which he would put up 2 more difficult points for FR. H2 Prop Jake Ellison took the ball from a lineout at FR’s 15m line and would run through a wall of players to touch it down in the right corner. Brennan connects with the crossbar to once again be denied the conversion. David Ebert would finish off the night for H2 with a hat trick scored under the posts, and Brennan would put up the final Harlequin points with the conversion. Final score: 52-14 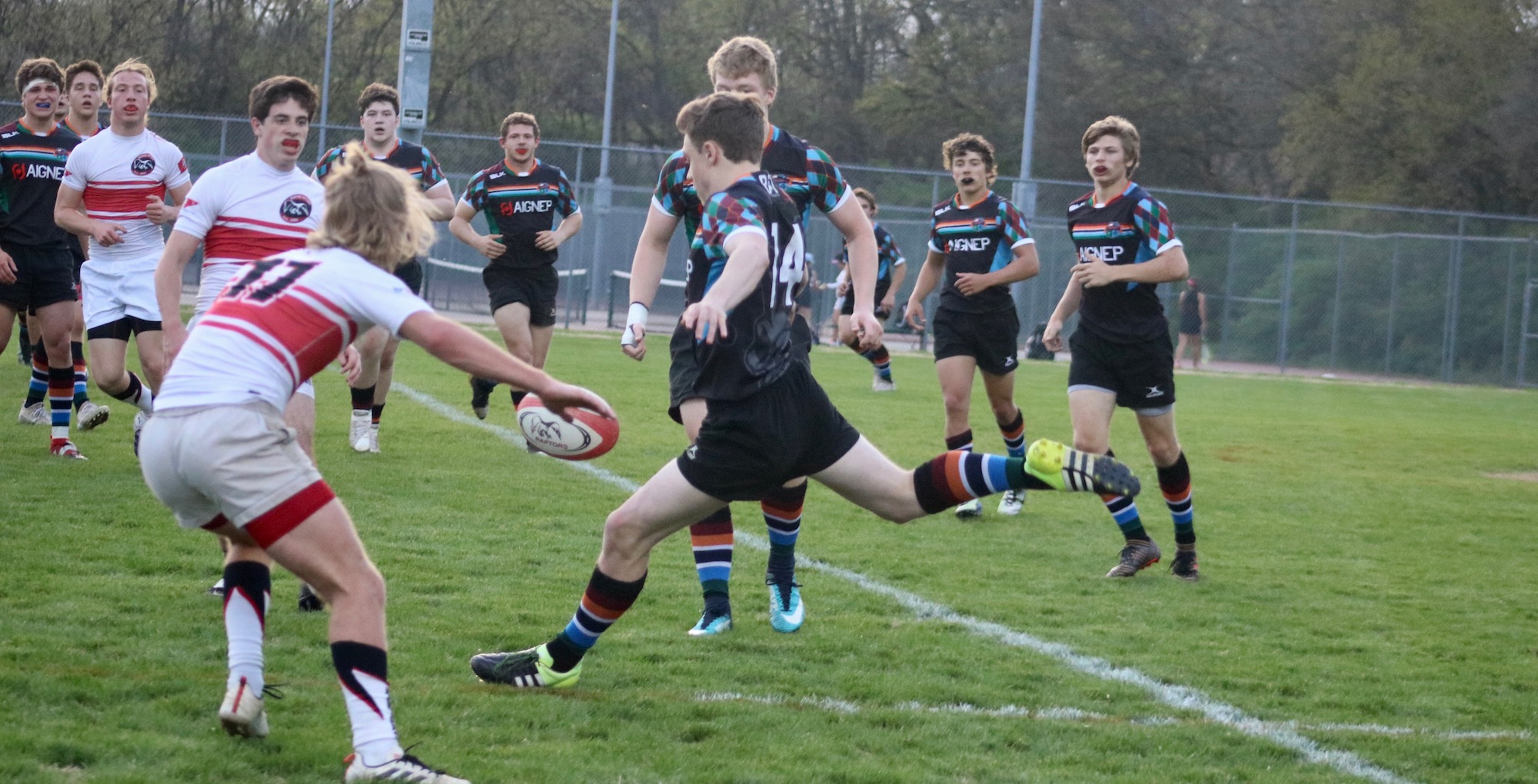 With both sides having graduated many experienced players last year and both sides undefeated in the MTR Conference, it was a bit of an unknown as to what to expect from this always anticipated match up. The Raptors were coming off a weekend in St. Louis at a tournament, and the Harlequins had not seen a match for a while with spring break and a rain out last week.

The Harlequins would strike first five minutes into the match with a penalty kick from wing Cormac Brennan after Ravenwood was called offsides at their own 35-meter mark. A few minutes later Ravenwood would answer out of a ruck and touching it down in the right corner. With a missed conversion, the Raptors would see their only lead of the match with the score at 3-5. It would take until the 20-minute mark and many phases of play before H2 would see scrumhalf Garrett Peal take the ball from a ruck on the far left side 23 meters out, run to the center of the pitch, and send it out wide to new wing Tanner Harnage, who would run it in to the right of the posts. Brennan once again does his magic and brings the score to 10-5 with the conversion.

With time elapsed, the second try by the Quins was an example of the tenacity of the H2 players, as first time flyhalf Ian Burr attempted to kick to touch and failed to get it out after a penalty deep in his own end. Winger Brennan showed his speed by chasing and coming up with the ball off of a bounce at the 19m mark. A penalty against the Raptors gave H2 a tap and go opportunity for crash ball, but resulted in a penalty at the 15m mark against the Harlequins. A tap and go by the Raptors saw sloppy ball and created an opportunity for inside center Josh Ebert to scoop it up and immediately get it out to his brother, outside center David, at 20m. A failed pass from David gives it back to a Raptor, who throws the ball back in to a teammate as he is pushed out at the 10m. Josh Ebert goes in for the tackle and causes Ravenwood to lose contact with ball, which allows David Ebert to pick it up and run it in at the far left side of the try zone. Another difficult conversion made by Brennan sees the half end with a score of 17-5.

It would be Ravenwood to put up points first in the 2nd half eight minutes in after a penalty against H2 at their own 5m line. Ravenwood’s scurmhalf would tap and feed the ball immediately, and this would result in the final points for Ravenwood on the night. A missed conversion makes it 17-10. 17 minutes into the half, H2 would be awarded a penalty on the right side at the 23m and would give Peal a chance to send it out wide to center David Ebert who would take it in at the far left side. Brennan converts another difficult one and the score moves to 24-10.

This match felt far from being over. Much of the play of the first 20 minutes of the 2nd half was in H2’s end of the pitch. Many on and off the pitch remember the substantial lead the Harlequins had in 2016 with only 12 minutes to play against the Raptors, which ended in defeat for the Quins. At the 25 minutes point, it appeared to be another Harlequin try with a beautiful run and touch down by scrum half Peal, but H2 would see this one brought back all the way to their own 30 meter for an offsides call after a kick by fullback Griffin Peal. Once again, time had elapsed and Ravenwood put in for a scrum at their own 15m, only to see H2 No. 8 Christian Moolman take it from the scrum and touch it down for the final try of the match. Brennan uses his boot one last time and seals the final score at 31-10.

Heading into the playoffs, Middle TN sees the same 2 names at the top of the conference that have been there for the past 3 seasons: The Harpeth Harlequins and the Ravenwood Raptors. Depending on the outcome of the playoffs, we could see these two strong sides meet up in May for the State Cup once again. With one State Title for each in the past 2 years, it would be a great match up to settle that tie.