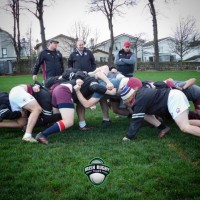 Game two of Fordham's three-game tour of Ireland resulted in a second-straight victory, as the Ram defeats Galwegians 33-17.

After beating Athy 19-17 Fordham was expecting another tough, competitive match, and got it.

Hosted well on and off the pitch by the Galway club, Fordham got tries from Tony Kutz and Tom Hurst in the first half.

Sending a note to fans back home, Hurst, the club president, said: “The Galwegians have been great hosts, and the tour has been incredible so far,. It was a personal goal of mine to slide in a muddy try-zone this trip, and I got the chance thanks to a great pass from Nic [D’Amato] with just enough room on the edge, so I could stretch my legs and score.”

Kraig Puccia, Jaime Moraiz, and Derek Cartegena all touched down in a 33-17 victory.

That sets up another game against Highfield RFC in Cork.

For Fordham, the tour, organized and overseen by Irish Rugby Tours, has been mostly about rugby but includes cultural and sightseeing stops throughout the week. But the games have been hugely important as the program looks to bring the team closer together and test itself. Irish Rugby Tours secures touring sides tickets to major rugby games, tours of iconic historic sites, and anything else the tourists want to do. But what also sets IRT apart is setting up coaching sessions with top coaches, and understanding the playing landscape well enough to give teams the right level of games.

Close wins or close losses, the touring teams want a game that asks something of themselves, and in two matches so far, both wins, Fordham has received that.

For more on touring anywhere in the world, contact Irish Rugby Tours>>.